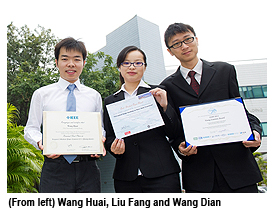 The students, all from the Department of Electronic Engineering (EE), are Wang Huai, who was awarded First Prize in the IEEE Region 10 Student Paper Contest (Postgraduate Category); Wang Dian, who won the Young Scientist Award in the 2011 International Symposium on Antennas and Propagation; and Liu Fang, who took the Best Student Award at the 10th International Workshop on Digital-forensics and Watermarking.

To solve the problem, Wang Huai, under the supervision of Professor Henry Chung Shu-hung from EE, designed two one-step conversion circuits capable of converting high-voltage power to low-voltage power in a cost-effective way, which can be used on existing public transport with some modifications.

“It has been quite a challenge to find the right switching devices and arrange them in the right configuration to achieve the desired objective, and I’m pleased my research has made that possible,” Wang Huai said.

The results showed that the systems were able to achieve an efficiency of more than 90% during the power conversion process, an improvement of 20% compared to conventional systems. This is equivalent to saving close to 9.8 million kWh each year in electric power and HK$9 million on energy bills for the mass transit railway system in Hong Kong, reducing carbon emissions by about 7,600 tonnes.

Wang Huai said the urban rail market around the world is expected to grow rapidly in the next five years, and he hoped the technology he has developed will contribute to developing a greener public transport.

The winning paper by Wang Dian, “A novel shorted high-order mode millimeter-wave patch antenna” co-authored by Chair Professor Chan Chi-hou from EE, and Dr Steve Wong Hang and Mr Ng Kung-bo from the State Key Laboratory of Millimeter Waves, proposes that high-speed short-range communication can be maintained at a high quality but at a lower cost with their novel antenna.

Wang Dian said conventional antennas working at 60GHz, the ideal bandwidth for high-speed short-range communication, necessitate expensive costs as well as strict restrictions on fabrication processes and facilities because of their minute size. The antenna they have developed has been enlarged for easy fabrication, reduces the cost, and still works well at 60GHz. Experiment results showed that it achieves better results compared with existing antenna made of silicon.

Liu Fang has been conducting research on more accurate watermarking techniques to combat digital forgery or the unauthorised use of digital information, which is becoming more common these days. In her winning paper “Perceptual image hashing via wave atom transform”, she has devised a better method to authenticate images and ensure security.

“Wave atom transform has better feature extraction capability than traditional transforms. According to experiment results, the new approach achieves better performance in the aspect of robustness, fragility and security,” said Liu Fang, whose work is supervised by Dr Cheng Lee-ming from EE.

The students said they felt proud and happy to have received the awards and recognition. They were also thankful to CityU for giving them the opportunities to pursue their research interests, and to their supervisors and co-researchers for supporting them.