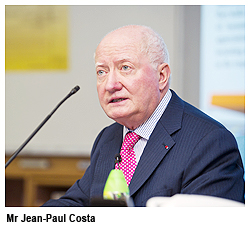 The former president of the European Court of Human Rights, Mr Jean-Paul Costa, recently retired from a five-decade-career dedicated to protecting fundamental rights and freedoms, was speaking at a City University Distinguished Lecture on 17 November at City University of Hong Kong (CityU) to an audience packed with law students, faculty from the School of Law and other interested parties.

His lecture began with a short presentation on the European Court of Human Rights followed by an assessment of the Court’s actions since its beginning and a general indication of its future development.

By way of background, the European Convention on Human Rights was signed in 1950, Mr Costa explained, a follow-up to the Universal Declaration of Human Rights adopted in 1948 by the General Assembly of the United Nations. The Convention is a catalogue of rights that member states commit to. 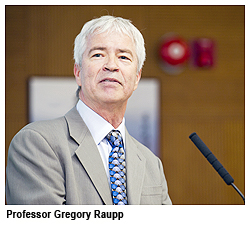 “Since its start half a century ago, the story of the Convention and of the Court has been a success story. The field of the rights protected has been constantly extended,” Mr Costa said. A very large number of reforms have been introduced into the legal systems of member states, from criminal procedure and political freedoms to the right for free elections and to privacy, he added.

Mr Costa pointed out, though, that the work of the Court was not always universally appreciated. National courts can feel marginalised if the Court takes an opposite view on a particular case it has passed judgement on, or the Court might be accused of being too reserved in its assessment.

“Some governments are reproaching the Court for encroaching upon the competences of the national legislators, for shrinking the margin of appreciation and the subsidiarity principle,” he said. One example of this is the case of a prisoner’s right to vote, which is proving contentious with some member nations.

Although retired, Mr Costa is keen to remain active in the field of human rights, citing Article 8 of the Convention as one of his major interests, i.e. the right to privacy in one’s private life, at home, within the family, and in one’s correspondence.

Professor Gregory Raupp, Vice-President (Research and Technology) and Dean of Graduate Studies at CityU, thanked Mr Costa for his talk, praising its universal themes and honourable actions in the pursuit of basic rights for everyone.