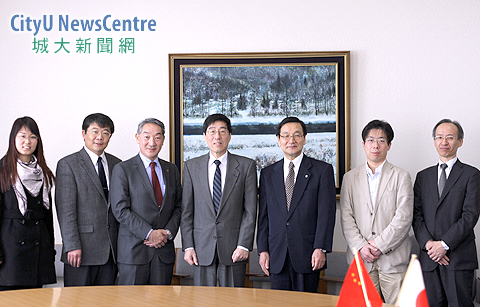 Professor Way Kuo (centre), University President, was invited by Professor Akihisa Inoue, Tohoku University President to give a talk on reliability and nuclear safety in Sendai, Japan on 21 April following the accident at the Fukushima nuclear plant. He was the first academic to visit the area after the big earthquake.

During his two-day visit, Professor Kuo explored the possibilities for research and educational exchange between Tohoku University and City University of Hong Kong (CityU) with Professor Yoshiaki Nemoto, Executive Vice-President and Professor Akihiro Kijima, Vice-President. He also visited the Cyclotron and Radioisotope Center, WPI-AIMR, and the Institute for Materials Research. He has exchanged views with the top nuclear scientists of Tohoku University.