An anti-phishing scientist at City University of Hong Kong (CityU) has been honoured with a major award in the field of pattern recognition for his pioneering contributions to devising innovative solutions to phishing activities.

Dr Liu Wenyin, Assistant Professor in the Department of Computer Science at CityU, was awarded the Fellow Award of the International Association of Pattern Recognition (IAPR). 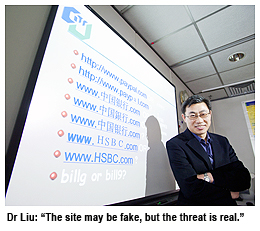 Dr Liu is among 17 distinguished awardees worldwide, and the only one from Hong Kong, to receive the honour this year. IAPR is an international organisation of leading experts and professional associations in the field.

The selection criteria are stringent. IAPR has conferred the Fellow Award on fewer than 200 of its 10,000 members in the last 16 years.

“IAPR has specified that the number of new fellows elected each year should not exceed 0.25% of the total membership. So this is a great honour, and international recognition for my work,” said Dr Liu.

Phishing involves using fraudulent websites to trick online users into parting with credit card details and other personal information. What Dr Liu does in his research is to help companies use document analysis technology to help combat the threat. The software teaches computers to “break down” a document into elements recognisable to computers, understand its structure, and recognise its components, including text, lines and symbols. 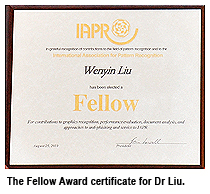 Dr Liu and his team are the first in the world to research and provide solutions to this particular area of phishing detection. His current project focuses on identifying companies that have been targeted by phishing websites. It builds on his past research that provided a self-defense tool for individual companies by helping them to search for potential phishing websites by themselves.

“Computer users can report to us ‘suspicious’ websites. We then track and uncover which particular company is being targeted,” he said. “Data can be collected to identify the companies which are most targeted in phishing attacks. The software will serve as an effective watchdog tool. As the database grows, the monitoring can become more comprehensive.”

Dr Liu’s software can also be applied to websites written in a range of foreign languages. On one occasion Dr Liu’s team discovered that the official site of a European country’s ministry of foreign affairs had fallen victim to a clone site.

Like all good researchers, Dr Liu looks for problems in everyday life. He is proud that his research solutions in the battle against phishing benefit society.

“The last 15 years have been very exciting, identifying and solving new problems in pattern recognition,” he said.