Orientation days for PhD students in Shenzhen and Suzhou

The Chow Yei Ching School of Graduate Studies at City University of Hong Kong (CityU) organised two orientation days for doctoral students at the Shenzhen and Suzhou campuses on 8 and 11 October, respectively.

The 2010 Orientation Day for Students was held at the new City University of Hong Kong (Shenzhen) Research Institute Building (CityUSRIB) in Shenzhen. 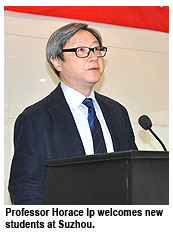 Professor Horace Ip Ho-shing, Acting Vice-President (Research & Technology) and Acting Dean of Graduate Studies at CityU, extended a warm welcome to the new students during his speech at the ceremony. The students are studying under a joint PhD programme with Sun Yat-sen University and Wuhan University.

Professor Ip also introduced an array of resources and opportunities for students, such as the Peter Ho Conference Grant which provides funding for students to attend overseas conferences.

Professor Hui Yer-van, Associate Dean of Graduate Studies at CityU, reminded students in his address to join social activities in addition to pursuing their academic development. He encouraged them to establish a Student Association to promote closer ties among themselves. 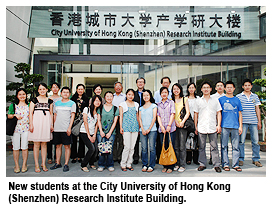 In addition, an orientation ceremony was held in Suzhou for students from the University of Science and Technology of China (USTC) who have just commenced their studies under a joint PhD programme offered by CityU and USTC at the USTC-CityU Joint Advanced Research Centre (Suzhou).

Thirty-two new students have been recruited, making a total of 155 students stationed in Suzhou.

Professor Gu Jibao, Associate Dean of Graduate Studies at USTC, said in his welcoming address that USTC is one of only two universities from mainland China placed in the top 50 of the world university rankings published by the Times Higher Education. 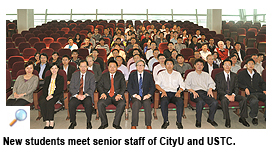 Professor Ip said in his welcoming speech at Suzhou that CityU ranked 15th among the top Asian universities according to the 2010 Asian university rankings published by QS (Quacquarelli Symonds) in May 2010.

“By combining the best of CityU and USTC, students can benefit from the high quality education and services provided by both universities,” Professor Ip said.

The Chow Yei Ching School of Graduate Studies holds regular meetings with the Graduate School of USTC to discuss academic and non-academic issues relating to PhD studies of students in Suzhou as well as the strategic planning/development of the programme to ensure that the programme is robust.