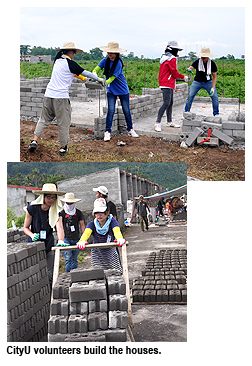 A team of 16 students from the College of Business spent two weeks over the summer building houses in the Philippines for underprivileged families.

The College encourages its students to broaden their horizons by volunteering for its annual Work Abroad Programme. This year 16 business students joined a project called “A World Where Everyone Has a Decent Place to Live” organised by Habitat for Humanity, an international volunteer organisation.

The team, comprising students from different majors and cohorts in the College, spent 14 days at a resettlement site, called Bayanijuan, in Laguna south of Manila.

The CityU students took part in every stage of the house building process, removing weeds from the land where the houses were to be built and making the concrete interlocking blocks that would be used to make the walls. It was challenging work, transporting materials and mixing the cement, but the experience was extremely rewarding, especially getting to know the people who would eventually live in the homes. 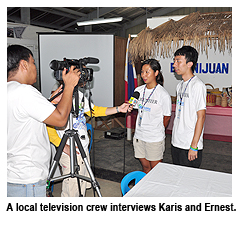 The poverty the families had to endure on a daily basis came as a shock to the CityU students at first. But they were also deeply impressed by the fortitude that the families displayed despite the impoverished living conditions.

Towards the end of the trip, the team had lunch with Mr Jonathan Reckford, Chief Executive Officer of Habitat for Humanity International and was interviewed by ABS-CBN Foundation, the social arm of a local television network. 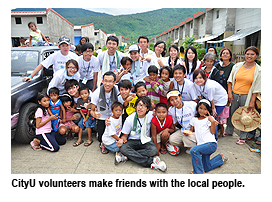 As they built the houses over the summer, the CityU volunteers quickly realised they were also cementing strong friendships with the local people and with the other people on their team. One of the most important lessons to come out of this trip was that “simple is happy”. The volunteers said that they led much simpler lives in the Philippines than they ever did in Hong Kong. This priceless experience left all of them wiser and more circumspect, full in the knowledge they had gained more than they had given.

The team would also like to thank Dr Mary Pang Yuet-ngor, Associate Dean of the College of Business, Dr Beatrice Chu Chi-bik, Senior Research Associate in the College, and Ms Lee Ka-yee, Executive Officer, for their advice and support.