City University of Hong Kong (CityU) named its student career centre after Ms Fan Lee Foon, the late grandmother of notable alumnus Mr Andrew Fan Ka-fai, at a ceremony on 7 September. The honour was given in appreciation of Mr Fan’s significant contributions to the University. 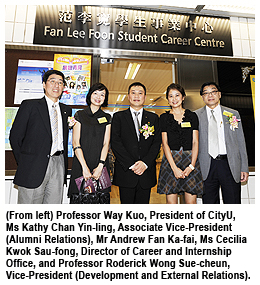 Mr Fan said the new name will forge an even stronger bond between his family and CityU, an institution he regards as his second home.

During the naming ceremony, Mr Fan recalled how his grandmother helped to nurture within him a caring personality, explaining how she possessed the traditional virtues of a Chinese woman: kindness, generosity, tolerance and diligence. Her motto “while drinking water, remember where it comes from” has cast a lasting influence on him. He said she showed her love for her family, especially her children and grandchildren, by setting herself as an example for them to follow.

A CityU graduate, Mr Fan provides generous donations and staunch support to the development of his alma mater. He takes time out from his busy schedule to serve the University as an advisor to the Alumni Giving Club, Alumni Ambassador, Diamond Sponsor for the “Bridge to Success” educational advancement project, and founding sponsor of the Top Outstanding CityU Student Leader Awards and Mainland Alumni Network Scholarship.

CityU conferred the title of Honorary Fellow and the first Distinguished Alumni Award on Mr Fan in 2009 in recognition of his outstanding achievements and contributions to society and his alma mater.

Mr Fan said he is very pleased that CityU ranks in the top universities of the world, despite a short history of 26 years.

“I am grateful to the University for nurturing me. University education is a starting point for students and the first step towards their career success,” Mr Fan said.

At the naming ceremony, Professor Way Kuo, CityU President, thanked Mr Fan for his loyalty. “Mr Fan puts feelings for his alma mater into action. He is a great role model for our alumni and students, exemplifying CityU’s philosophy of all-round education,” Professor Kuo said.

The Fan Lee Foon Student Career Centre, located on the 4th floor of the Amenities Building, has been recently renovated. It has a floor area of 132 square metres and is equipped with interview rooms and training facilities and provides information on career development and further education.