Professor Way Kuo, President of City University of Hong Kong (CityU), attended the 10th Annual Assembly of Shenzhen Virtual University Park (SZVUP) and the University Forum on 13 October. He also presided over the opening ceremony of CityU's State Key Laboratory of Millimeter Waves, which is located in SZVUP.

The University Forum was attended by Mr Zhao Qinping, Vice Minister of the Ministry of Education, Mr Xu Zongheng, Mayor of Shenzhen, Mr Liu Yingli, Science and Technology Advisor to the Mayor of Shenzhen, and university presidents. The annual event bolsters communication among members of SZVUP on industrial technologies, professional education and applied research development, and strengthens the collaboration between CityU and tertiary education institutions on the mainland. It further consolidates CityU's strategy of positioning Shenzhen as the base of its applied research, incubation and teaching activities on the mainland.

Professor Kuo, attending the event for the first time since assuming the presidency, cheerfully told forum participants that CityU's rank in the list of the world's 200 best universities published by The Times Higher Education Supplement of UK rose for the fifth consecutive year. In 2008 CityU was one of four Hong Kong universities on the list, ranking 147th.

Professor Kuo's speech, titled "Technology and incubation-education-research", emphasised the close relationship between technology and commercialisation. Professor Kuo pointed out that while companies were stressing the development of high technology, they should at the same time pay attention to upgrading the quality of low technology products and improving work efficiency. He said universities and society were in unity, and education and research were inseparable. 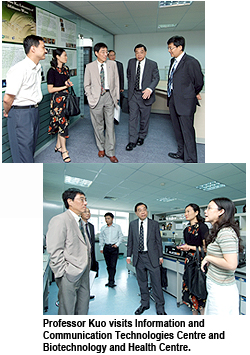 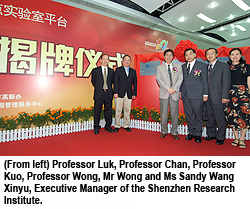 "With its establishment in the Shenzhen technology zone and through our efforts and continued support from Shenzhen, the State Key Laboratory of Millimeter Waves can continue to contribute to the Nation's and Shenzhen's research on millimeter wave technology and communication technology," said Professor Kuo.

CityU officially became a member of SZVUP in December 2000. With substantial support from the national government and various departments of the Shenzhen municipal government, the University's efforts in Shenzhen have achieved fruitful research results over the past eight years.