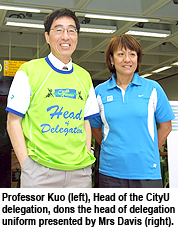 In keeping with the spirit of the Olympic Games, City University of Hong Kong (CityU) will take part in the Standard Chartered Hong Kong Marathon 2009. To mark its support of this charitable sporting event, CityU held a Kick-off Ceremony on 8 October that attracted a large crowd of enthusiastic students and staff.

By organising a delegation to take part, the University has achieved the objectives of promoting whole-person development and encouraging exercise, while fostering cohesiveness and a strong sense of team spirit within the University community. Professor Way Kuo, President of CityU, showed his commitment by serving as both the officiating guest of the Kick-off Ceremony and Head of the CityU delegation.

Mrs Dorothy Davies, Convenor of the Working Group for the CityU Standard Chartered Hong Kong Marathon 2009 delegation and Associate Director of Student Development Services (Physical Education), presented a uniform to Professor Kuo as a symbol of his leadership of the CityU team.

Professor Kuo delivered a speech at the ceremony about his thoughts on leading the CityU delegation. “The University will soon celebrate its 25th anniversary. Like a young person at the prime age of 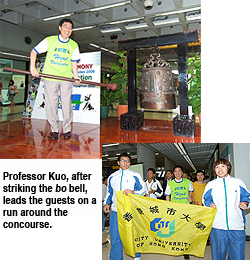 25, it’s the right time for the University to take part in the marathon. There’s an old Chinese saying, ‘In a journey of 100 miles, half is 90’, meaning the last 10 miles of a100-mile journey is the most difficult part to finish. I hope all team members can persevere and make the utmost effort to pass the finish line in the marathon next year,” said Professor Kuo.

The highlight of the ceremony arrived when Professor Kuo performed the bell-ringing duty, signifying the official formation of the CityU delegation. In chanting the countdown, Professor Kuo held up a wooden bat to strike the bo bell, one of the Classical Chinese Serial Bells in the University Concourse. Two student athletes then chaperoned Professor Kuo to lead other officiating guests, invited guests, staff and students for a run around the concourse. 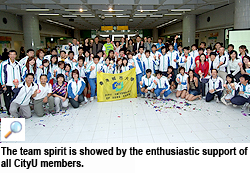 Mrs Davis was excited to have Professor Kuo’s support of the event. “Professor Kuo’s enthusiasm could significantly boost morale. Also, I hope the participation of Professor Kuo will motivate more CityU members to take part in the event and make the CityU delegation even stronger.”

The target number of participants is 625 (i.e. 252), which has a special meaning. The number 25 stands for the upcoming 25th anniversary of CityU, while 2 represents the second year of CityU taking part in the marathon.