Professor Way Kuo, President of City University of Hong Kong (CityU), was awarded the Certificate of Foreign Member of the Chinese Academy of Engineering (CAE) at the 9th General Assembly of CAE held in Beijing on 23 June. The honour was bestowed in recognition of his contribution to the field of reliability design for microelectronic products and systems. Professor Kuo is one of the few well-recognised academia simultaneously elected as a member of the US National Academy of Engineering, International Academy for Quality, and Academia Sinica in Taiwan. 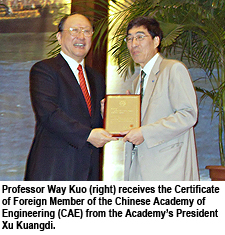 The General Assembly represents the most important annual event for the science and engineering sectors in mainland China. The Opening Ceremony was held at the Great Hall of the People, with President Hu Jintao and Premier Wen Jiabao in attendance. President Hu also delivered important remarks.

Professor Kuo is one of the three foreign members on CAE’s 2007 new members’ list. He received the highest academic title available in engineering science and technology in China from President Xu Kuangdi of CAE.

“It is a great honour for me to be elected as a Foreign Member of CAE. I am very grateful CAE has recognised my research in this way. I will lead CityU in promoting and developing a devotion to science in order to contribute to the mainland and the world,” Professor Kuo said.

“CityU always strives for excellence in applied research. We have a strong team of researchers and state-of-the-art facilities. CityU will reinforce its collaborations with mainland and international experts to create synergies that will elevate the University to new heights,” he added.

CAE elects new members every two years. Scholars and specialists with foreign citizenship who have made significant contributions to engineering and technology in China and enjoyed high academic standing internationally can be nominated and elected as Foreign Members. Currently, CAE has 721 members, with six from Hong Kong and 34 foreign members world-wide.