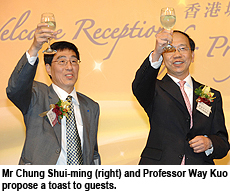 City University of Hong Kong (CityU) staged a Welcome Reception on 6 June to introduce to community leaders its new President, Professor Way Kuo, who assumed duty on 14 May.

In an introductory address, Mr Chung Shui-ming, Chairman of Council of CityU, spoke of the influence Professor Kuo had already brought to bear on campus since his start date and in the months preceding his officia

l assumption of duty. “Professor Kuo has already impressed me with his passion for the future of the University and the dedication he has displayed in facing the challenges confronting CityU,” said Mr Chung.

Professor Kuo said there would undoubtedly be many challenges ahead, but he believed that with the unwavering support of UGC members, Education Bureau officials, Legislative Councillors, community leaders, colleagues at higher-education institutions, donors and the CityU community, many of the issues would be resolved.

Professor Kuo said CityU would strive to reach beyond the city boundaries of Hong Kong and aim for its applied research and teaching to have an international impact. “We have our challenge - our challenge is to be among the best in the whole world and to serve our society,” he said.

After the speeches, Professor Kuo proposed a toast to CityU. The audience then mingled to a backdrop of traditional and western music played by CityU students.

In coming to CityU, Professor Kuo relinquished his position as University Distinguished Professor and Dean of Engineering at th 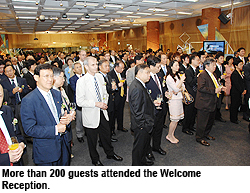 e University of Tennessee. He was previously the Wisenbaker Chair of Engineering in Innovation and Executive Associate Dean of Engineering at Texas A&M University. For seven productive years he was head of its Department of Industrial Engineering, which under his leadership came to be rated among the best in the US.