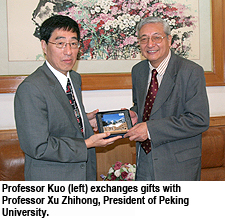 Soon after assuming the presidency on 14 May, Professor Way Kuo, President of City University of Hong Kong (CityU), stated to the faculty and staff that he would endeavour to seek strategic links with renowned mainland universities.

Acting upon his assertion, Professor Kuo travelled to Beijing, where he held talks with Professor Xu Zhihong, President of Peking University, and Professor Li Wei, President of Beihang University, on 3 June and 4 June respectively. The focus of the trip was to strengthen ties and pave the way for substantial cooperation with strong mainland partners.

During the discussions, Professor Kuo pointed out that CityU had undergone rapid development in the past few years and now laid claim to world-class faculties.

There was, however, always room for improvement and new and stronger inter-university ties could help each partner institution scale new heights. Investing in the future, especially in strategically important subjects, would be one of his top priorities. Establishing strategic alliances and partnering renowned mainland universities or universities with specific areas of excellence would help to achieve the "1 + 1 = 3" synergy effects.

Professor Kuo said CityU treasured academic exchanges with Peking University, a world-class institution with more than 110 years of glorious history and a great number of academic experts. He hoped the two campuses could start with student exchanges before initiating more in-depth cooperation to further enhance the high educational standards on the mainland and in Hong Kong, for the benefit of mankind. 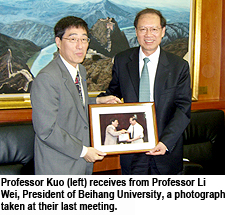 Professor Kuo admired the academic tradition of Freedom of Ideas and Incorporation of Diverse Thoughts and wished to promote such an all-embracing culture on the CityU campus, while working together to develop the University into a first-class institution.

Beihang University is familiar territory for Professor Kuo, who visited the university as early as 1986. In 2006, he was named Honorary Professor at Beihang. In his meeting with Professor Li Wei, President of Beihang, Professor Kuo expressed his wish to increase academic exchanges with Beihang, which was known for its academic strength in aeronautical and astronautical engineering. 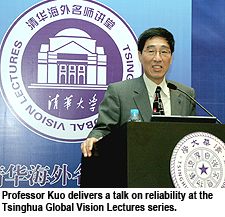 At Tsinghua University, Professor Kuo attended the presentation ceremony, on the afternoon of 4 June, of his Honorary Chair Professorship, granted in 2007, and delivered a lively speech on reliability as the 19th speaker in the Tsinghua Global Vision Lectures series.