The City University of Hong Kong (CityU) community has maintained its generous level of support of those affected by the Sichuan earthquake. To date, about HK$670,000 has been raised. 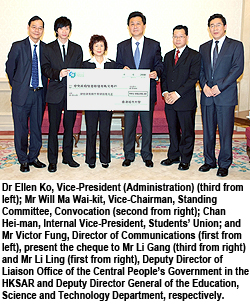 Thanks to the generosity of staff, students and alumni, the University has raised HK$448,046 in less than two weeks for victims of the Sichuan earthquake. Dr Ellen Ko Law Yin-lan, Vice-President (Administration), and representatives of alumni and students, presented the cheque to the Liaison Office of the Central People’s Government in the Hong Kong SAR on 4 June to support the rebuilding of primary schools in the affected areas.

A total of HK$168,116 was raised at the Used Book/CD/DVD Sale organised by the Staff Association from 19 May to 21 May. The proceeds were passed to the Hong Kong Red Cross on 30 May.

The strong passion of the CityU community for helping the victims continues. On 3 June, the CityU Choir and Staff Association Singing Group, with about 70 members, presented 20 songs at a charity concert on campus. In only 90 minutes they raised HK$55,939 for Hong Kong Red Cross. In addition, the CityU Philharmonic Orchestra will participate in a charity concert organised by the China Literacy Foundation on 5 June at St John’s Cathedral to raise fund for the people of Sichuan. 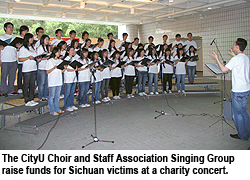 Teachers, students and alumni of the Department of Applied Social Studies have launched Project Rebuild for the Sichuan Earthquake: Rebuilding Lives and Schools. The fundraising campaign was started on 3 June. In addition to a charity bazaar selling accessories outside the Student Canteen, donation boxes will also be set up outside the Canteen, iCafe and Run Run Shaw Library. All contributions will be passed to Sowers Action to assist in the rebuilding of schools.

The Department will train alumni and students before they visit Sichuan in August to provide counselling for the survivors. Donations for the project can be made directly to CityU’s bank account at Hang Seng Bank [account number: (024)-293-1-187708], or by crossed cheque payable to “City University of Hong Kong” by 30 June 2008.