Duan Renjun, a mathematics PhD student at City University of Hong Kong (CityU), was awarded the Zhong Jiaqing Mathematics Award for his outstanding research into the mathematical theory of the Boltzmann Equation. Eight winners were selected this year and Duan was the only one from Hong Kong. 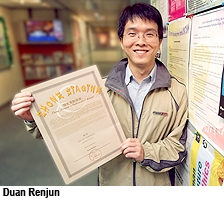 The Zhong Jiaqing Mathematics Award is granted to outstanding students who have just completed their Masters or PhD in mathematics. The award is recognised as one of the three major mathematics awards on the mainland and is respected as a prestigious award for young mathematicians.

Duan has always been interested in mathematics, with a particular focus on kinetic theory, which has important applications in physics. He has dedicated a great deal of time and effort to research on mathematical theory of the Boltzmann Equation and has published papers in major academic publications, one of which earned him an award. The Boltzmann Equation is one of the most important equations of non-equilibrium statistical mechanics and represents a major challenge to mathematicians.

Duan said he was honoured to receive the award. "I'd like thank Professor Tong Yang, Chair Professor of Mathematics and Associate Dean of Faculty of Science and Engineering as well as the supervisor of my master thesis for their encouragement and support," said Duan.

He also thanked CityU for providing an environment conducive to research. "The academic environment at CityU is very open and free, allowing students to think in an independent way. In addition, I have broadened my perspective by participating in local and international conferences and seminars," Duan added.

Duan received a master's degree in Base Mathematics from Hua Zhong Normal University in 2005. He won the Hubei Provincial Outstanding Master's Thesis Award for his masters thesis entitled "Global Existence to Boltzmann Equation with External Force in Infinite Vacuum" in 2006.

Due to the close relationship between CityU and mainland universities, and the fact Duan had learnt about the excellent standard of CityU's Department of Mathematics, he decided to pursue his PhD study at CityU. Duan said there were still a lot of unresolved mathematical problems in Kinetic Theory which were very challenging and he wished to continue his research after graduation.

Praising Duan's performance, Professor Yang said: "I met Duan when I visited Hua Zhong Normal University. He is a very bright and hard-working student who has immense potential in mathematics."

The award was established in 1987 by mainland and American Chinese mathematicians to recognise the contributions of Zhong Jiaqing to his field. The award is granted to outstanding students taking Master’s or PhD degrees in mathematics, and encourages young researchers to devote themselves to mathematics research.