Among the 30 contributions selected by the conference, his paper entitled “Generic Certificateless Encryption in the Standard Model” was the only entry from Hong Kong. He is the first Hong Kong student to win the award. His research will enhance the security of electronic communications. 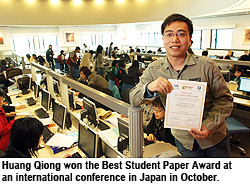 Huang completed the paper in two months under the supervision and guidance of Dr Duncan Wong Shek, Assistant Professor from the Department of Computer Science of CityU. The award is international recognition of one of the achievements of CityU students and academics.

“A number of students from our department have previously received acclaim at international conferences. But it is the first time one of our students has won an award in a very prestigious international conference on cryptography,” said Dr Wong. “Huang has built the first secure structure for the standard model and it is a great contribution to the development of cryptography.”

Prior to joining Dr Wong to research digital signatures, Huang received a master’s degree in Computer Science from the Graduate School of Shanghai Fudan University. In order to join the IWSEC, he began his computer security studies at the beginning of the year.

Huang said CityU had a vibrant learning atmosphere and students were very dedicated to their studies. “The academia and facilities here are of as high a standard as those in Europe and America. The award is proof that our research is being internationally recognised,” Huang said.

IWSEC is a prestigious international conference on computer security organised by the Information Security group of The Institute of Electronics, Information and Communication Engineers and the Computer Security Group of Information Processing Society of Japan. The 2nd IWSEC received around 120 submissions from around the world, of which only 30 were accepted.