City University of Hong Kong (CityU) places equal emphasis on education and research. With the concerted efforts of all staff and students, the University has registered significant achievements in both areas. Its focus on applied research has also yielded various applications that have been of benefit to society.

Scientific research development at CityU has benefited not only from the support of its partners but also the Chinese Academy of Sciences (CAS). On 13 November, Professor Lu Yongxiang, President of CAS, led a six-member delegation to CityU. 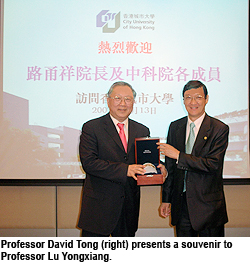 In his welcoming speech, Professor David Tong Shuk-yin, Deputy President of CityU, said that as an applied research-oriented university, CityU strove to convert its research outcomes into applications and had won acclaim from the business and industrial sectors.

“CityU builds collaborative relationships with other academic and research institutes to leverage each other’s respective strengths,” said Professor Tong. “Also, through collaboration, we can work together to nurture a new generation of scientific research professionals and make contributions to the economic and social development of Hong Kong, the Pearl River Delta and China as a whole.” 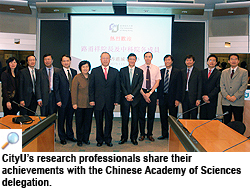 Professor Lu commended the University’s research development. He encouraged CityU to strengthen its collaboration with universities and research institutes on the mainland and said CAS would offer its strong support. At the end of the visit, Professor Lu requested a copy of all the presentation reports to follow-up upon his return to Beijing.

In the student presentation session, Zhang Xiuyin, a PhD student in the Department of Electronic Engineering, briefly described his study life at CityU. Professor Lu expressed appreciation of the effort CityU had made in grooming scientific talent. He said that with continued access to resources, CityU would scale new heights in its development under such a strong research team.