Student athletes from City University of Hong Kong (CityU) have shone once again at this year’s competitions held by the University Sports Federation of Hong Kong, China (USFHK).

second runners-up in an intense competition that included 84 events and 11 local tertiary institutions. In addition, the women’s teams won the overall championship, while the men’s teams secured the overall first runner-up (see table below).

The climax of the season was the CityU Sports Team Annual Prize Presentation Ceremony which was organized by the Student Development Service (Physical Education) on 27 April at the Wei Hing Theatre. After an enthralling drum performance by students, awards were presented to the most valuable athlete, the most enthusiastic athlete, the best improvement, the best coach and trainer, and the best academic performance.

Under the motto “Be the best that we can be,” CityU’s sports teams 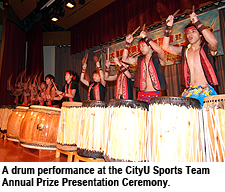 encourage students to exploit their sporting potential for whole-person development. In the ceremony, Professor Tong congratulated CityU’s athletes for their award-winning performances and encouraged students to use sport to boost team spirit and confidence, qualities that would be useful for their future studies and career. This is also one of the objectives of whole-person development, Professor Tong added. 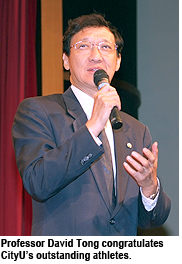 “Our sports teams achieve outstanding results each year through excellent team spirit,” he said. “On behalf of the University, I’d like to say to you all: ‘We are proud of you!’”

Lau Siu-ying, a Year 3 Marketing student, won the women’s squash competition in the USFHK competitions and was chosen as CityU’s most valuable athlete. “I would like to thank my parents for their encouragement and extend my heartfelt thanks to CityU, my coach and teammates for all their support. Through practice and competition, I can understand much better the importance of team spirit,” she said.

The USFHK Annual Prize Presentation Ceremony was held on 29 April and this year saw three new events: fencing, taekwondo, and woodball. CityU’s sports team clinched the championships in the men’s fencing, women’s taekwondo, men’s and women’s woodball, as well as the overall championship for woodball.

“We won the championships in both the men’s and women’s division of woodball the first time we participated in the competition,” said Ng Mo-yiu, a Year 2 Building Services Engineering student and captain of CityU’s woodball team. “This is thanks to everyone’s sense of team spirit and hard work. Our coach and team leaders have given us invaluable support throughout.”