Four leading members of the business and professional communities have been appointed by the Chief Executive to the Council of City University of Hong Kong for a term of three years with effect from 1 January 2007. 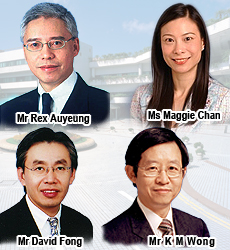 For the first time, the Council has a member representing the University Convocation following its establishment on 1 January 2007. Mr Andrew Fan Ka-fai, Chairman of the Convocation, will serve on the Council for a term of one year.

Two incumbent members, Dr Fung Wai-wah and Mr Mak Hoi-wah, were re-elected by staff to the Council. Representing the Students' Union in the Council is the newly elected President Mr Sixtus Leung Chung-hang