General education courses - a glimpse into the future

None of us possess a crystal ball, but some things 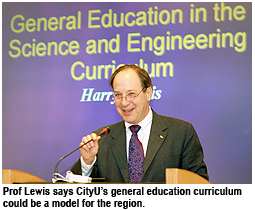 we can foresee. The world is changing, student profiles are changing, societal needs are changing, and a university curriculum must change, too, if it is to produce the graduates that future societies need.

This was the key message in a talk by Professor Harry Lewis, former Dean of Harvard College, a well-known author and respected commentator on curriculum reform, at a seminar on General Education (GE) on 10 January at City University of Hong Kong (CityU).

In his talk, Professor Lewis said CityU had the perfect occasion to seize the moment and design a set of GE courses for the new four-year curriculum, to be implemented in 2012, that would serve as inspiration for others.

“You have an extraordinary opportunity to do something quite revolutionary here at CityU by providing a model of GE courses for Asia and the rest of the world,” said Professor Lewis, the current Gordon McKay Professor of Computer Science at Harvard.

More than 100 members of staff attended the talk, part of a series of seminars and workshops organized by the Office of the Vice-President (Undergraduate Education), to find out more about the rationale for implementing GE courses at the University.

In a wide-ranging overview, Professor Lewis touched upon Harvard’s proposed framework which, he said, emphasized not breadth of education but more the provision of an education that students genuinely needed, rather than one that faculty wanted to teach.

Professor Lewis added that universities had a “higher purpose”, referring to fundamental values of education that should work to produce graduates steeped in a tradition of honour and dignity. 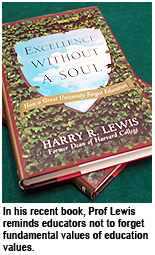 Focusing specifically on the US, Professor Lewis said GE courses should prepare students for living in a democratic and globalized world and for understanding themselves as products of, and participants in, traditions of art, ideas and values. In addition, GE should enable students’ understanding of the ethical dimensions of what they say and do.

In his welcome address, Professor Richard Ho Yan-ki, Vice-President (Undergraduate Education), said CityU could learn a great deal about how to design and implement GE courses from the experience of academics and university administrators around the world engaged in similar levels of curriculum reform.

In terms of progress, Professor Ho said the CityU General Education Committee had met at the start of the year and was now in the process of inviting proposals from all faculties and schools for GE courses. 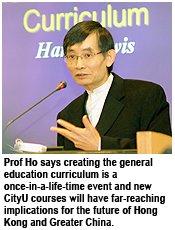 the future,” Professor Ho said. “We have to think ahead, to a time when many of us might have already retired, as far as 2016 when the first cohort of students from our new four-year curriculum will graduate.”

Professor Lewis’s talk followed that of Professor William C Kirby, the former Dean of the Faculty of Arts and Sciences at Harvard, who kicked off this current series of talks on GE in October 2006. Harvard's model for GE serves as a
blueprint for CityU's GE programme.

According to Professor Ho, CityU is currently in the Experimental Phase (2006-08) of its plans for GE during which time a small number of GE courses will be offered concurrently with Out-of-Discipline (OoD) courses.

During the Gearing Up Phase (2009-12), the OoD requirement will be phased out and a suite of GE courses totaling at least 21 credit units (including English and Chinese Civilization) will go into operation.