Searching for the key to Hong Kong's success through exchanges between scholars in the East and West is one of the foci of City University of Hong Kong (CityU) in developing general education courses for the four-year curriculum. 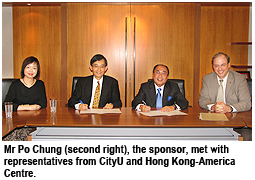 More frequent exchanges between scholars from CityU and the United States will be made possible by the support provided by the Fulbright-Hong Kong General Education Project. "The inbound and outbound visits of scholars will be imperative to our studies of the uniqueness that has led to Hong Kong's growth and thriving economy in the past few decades," said Professor Richard Ho Yan-ki, Vice-President for Undergraduate Education.

This new initiative comes from a pledge of US$150,000 donation by a successful entrepreneur and philanthropist Mr Po Chung in support of CityU's efforts in enriching general education. Professor Ho pointed out that CityU and the sponsor of this Fulbright project share a common conviction about the root of Hong Kong's achievements. "Hong Kong is a place which inherits the virtues of Chinese civilization and the merits of the rule of law, a very Western concept. It is a hybrid model that accounts for our unique culture and deserves further studies on how to sustain these advantages and to impart this precious knowledge to our young people," Professor Ho said.

"We are very grateful to the sponsor for this gift. A deeper understanding of the factors that offer Hong Kong and its people an edge over its neighbouring cities will help boost our confidence and prevent the city from being marginalized," he added.

The ultimate goal of the project, according to Professor Ho, is to design courses most suitable to CityU's undergraduate students. These courses will become an additional component of general education that reveals the core values and dimensions of Asian and Western civilization, in particular Hong Kong's culture and society.

In preparing for the four-year curriculum to be implemented in 2012, CityU has put forward a blueprint that aims to nurture "ideal graduates" for the 21st century. With an aim to provide young people with a balanced education, students will be required to take a minimum of 30 credits in general education on top of their major, minor and elective subjects.

"The general education courses will broaden students' horizons, increase their appreciation of cultural diversity and encourage them to be lifelong learners," Professor Ho said.

The Fulbright-Hong Kong General Education Project is administered by the Hong Kong-America Centre (HKAC), an organization whose aim is to promote the understanding between Hong Kong and American societies through educational and cultural exchanges. It has long held inbound and outbound programmes for students and scholars from US and Hong Kong to promote exchanges between the two places.

From 2008-2009 onwards, CityU and HKAC will recruit Fulbright scholars to work together with a team of CityU academics on building and enhancing its general education programmes toward the onset of the four-year curriculum.

About the Fulbright Programme: