More than 20 experts in Chinese art and culture converged on City University of Hong Kong (CityU) to discuss modernity and modern Chinese art. 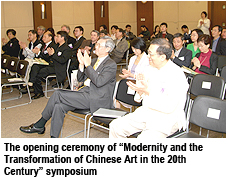 The symposium entitled "Modernity and the transformation of Chinese art in the 20th century" and the exhibition “The road of Chinese modern art” were co-organized by Chinese Civilisation Centre (CCIV) at CityU and China Central Academy of Fine Arts (CCAFA).

The purpose of the symposium, which ran from 29 April to 1May, was for renowned scholars from mainland China, Taiwan, Hong Kong and overseas to discuss the relationship between modernity, art, history and culture in China. "We should try to comprehend modernity through different approaches and acknowledge that modernity is changing constantly," Professor Chang said.

He highlighted the necessity of discussing the concepts of 'discipline', i.e. an academic subject, and 'modernity', and said a person who knew how to appreciate the beauty of art often possessed a creative and swift mind and led a meaningful life. 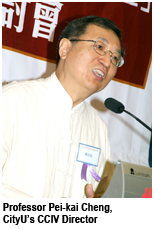 In his speech, Professor Cheng said by understanding culture we value art. "I believe a symposium like this is a rare opportunity to appreciate and experience history and culture," he said, adding that it was a great honour to co-organize the symposium with CCAFA. 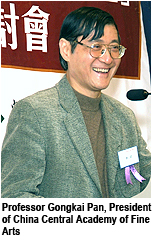 Professor Pan said he had been researching Chinese modern art since 1999, evaluating its impact from 1840 onwards and reflecting on modernity-related issues and theories of modernity in China.

Topics covered at the symposium included Chinese problematic; diversity and paradox of modernity; modernity and autonomy in Chinese intellectual life; and self-consciousness to the modern transformation: the Chinese experiences of modernity.

A roundtable discussion later focused on the validity of the discursive interpretation of modernity in China; modernity: original and successive; and self-consciousness in the modern transformation of China. 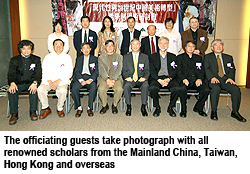 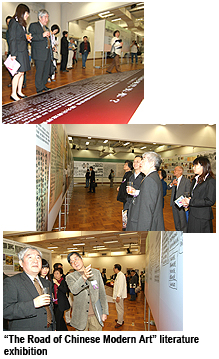 The exhibition entitled "The Road of Chinese Modern Art", which also ran from 29 April to 1 May, presented four strategic periods that emerged in the modern transformation of Chinese art between 1840 and 2000, namely traditionalism; syncretism; westernism; massificationalism. More than 2,000 pictures were on display.

A draft version of the book The Road of Chinese Modern Art by Professor Pan and others was presented at the exhibition.