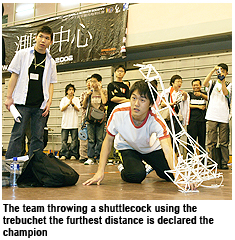 More than 1,400 secondary school students turned straws into trebuchets in the Inter-school Straw Trebuchet Design and Construction Competition held at CityU on 23 April. Organized by the Physics and Materials Science Society of the Students’ Union at CityU, the competition aims to encourage secondary school students’ interest in physics through real-life applications.

Over 400 teams from 150 secondary schools in Hong Kong and Macao took part in the competition. The event, organized for the ninth time, attracted the largest number of participants this year. Secondary schools from Macao were participating for the first time. 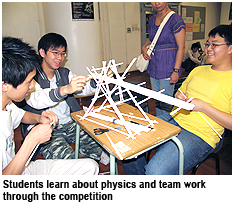 The construction of a trebuchet, a medieval military engine for hurling rocks, is the theme of this year’s event. Students from Forms One to Three participated in the junior category, while students from Forms Four to Seven joined in the senior category. Three to four students formed a team. Each team was given 150 straws and a roll of string (80 metres long) to construct a trebuchet within one and a half hours. Participants then applied the law of leverage and threw a shuttlecock using the trebuchet. The team throwing the furthest distance was declared the champion. 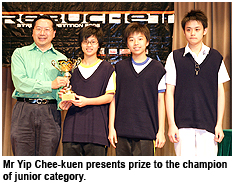 The Competition was supported by CityU’s Department of Physics and Materials Science (AP). Dr Cheung Ho-fai and Dr Shek Chan-hung, 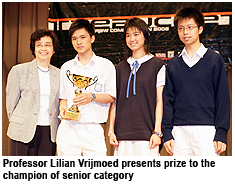 associate professors of AP, were the event’s consultants. “Through real life application and participation in a team work project, the competition will enhance students’ knowledge and interest in physics and materials science,” Dr Shek said.

The Inter-school Straw Design Competition has received popular support among secondary schools in Hong Kong since it was launched in 1998. The annual event is marked by a special theme each year. Past themes include “flying soft drink cans”, “robots” and “water wheel”. 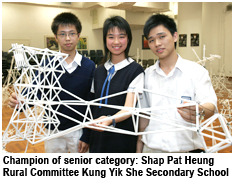 One of the student coordinators, Jimmy Ng Ka-hei, Executive Vice-President of Physics and Materials Science Society, said: “The event provides a good opportunity for CityU students to enhance their leadership and organizational skills. We have learned a lot, too.”