The Putonghua debating team at CityU has beaten the University of Hong Kong (HKU) to scoop first prize in the “Six Corner Cup” Inter-Collegiate Debate Competition 2006. Two of the CityU team earned the title Best Debater.

These achievements once again demonstrate CityU’s excellence in professional education and the high standards attained by our students.

The motion for this year’s debate was “Should we follow the golden mean?”. The CityU team presented forceful and highly articulate arguments in favour of the motion, which was a reference to the teachings of Confucius on virtue, to beat the HKU debaters by two points to one. The CityU team had outperformed their counterparts from the Chinese University of Hong Kong (CUHK) and the Hong Kong Institute of Education (HKIEd) before tackling HKU in the final on 18 March. 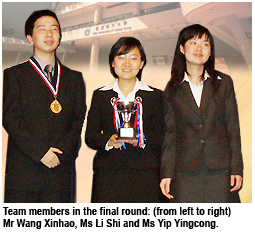 CityU’s Mr Lin Pui-yuen and Mr Wang Xinhao and were awarded the title Best Debater in recognition of their strong performances. Xinhao, the CityU team leader and a Year 1 student taking the BBA (Hons) in Marketing, won Best Debater twice, in the first and final round.

“I treasure this honour and I am very proud of our debating team,” Xinhao said. “Not only did the competition help us build up our confidence and improve our presentation skills, we also learnt to think from different angles to appreciate better the importance of team spirit.” 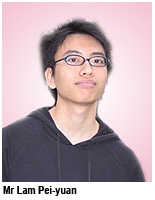 There are seven members to each debating team in the “Six Corner Cup”. The CityU team prepared by holding a “friendly” debate with a team from the University of Macau, and three senior CityU debaters—Mr David Xin, Mr Lion Lau and Ms Li Shasha—were invited to share their experience.

“I am pleased to see the rapid growth of our team,” David said. “Everyone tried to prepare well. In particular, Pei-yuan, a Year 1 student taking the Associate of Social Science in Public Administration and Management, was the only local student in the CityU team, so he put a lot of extra effort into improving his Putonghua pronunciation. So I am really pleased he won Best Debater in the second round,” David said.

In addition to CityU, HKU, CUHK and HKIEd, Hong Kong University of Science and Technology (UST) and Hong Kong Baptist University participate in the annual “Six Corner Cup”, which started out in 2005 and this year took place between 4 and 18 March. Each university takes turns holding the competition and this year UST played host.

The CityU Putonghua team was established in 2000 and comprises exchange students, students from mainland China and local students. There are 20 members in total. In addition to the “Six Corner Cup” competition and matches with other tertiary institutes, the CityU team also took part in the RTHK Inter-Varsity Debate Competition in November last year in which CityU was placed second runner-up.