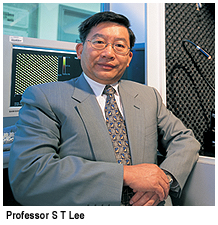 Chair Professor S T Lee of the Department of Physics and Materials Science at City University of Hong Kong has been shortlisted to join the prestigious Chinese Academy of Sciences (CAS) as Academician. He is one of 145 candidates, six of whom are from , nominated this year. One other distinguished researcher at CityU, Professor David Tong, Deputy President, was elected Academician of CAS in December 2001.

Professor Lee has been nominated for his significant contributions to the fields of superdiamond technology, nanoscience and organic electroluminscence. He is the Director of the Centre of Super-Diamond and Advanced Films (COSDAF) at CityU and the Founding Director of the Nano-organic Photoelectric Laboratory, The Technical Institute of Physics and Chemistry, CAS. He is adjunct professor at several universities in mainland , including , , and University.

With over 20 patents filed, Professor Lee received the Humboldt Senior Research Award in 2001, a Croucher Senior Research Fellowship from the Croucher Foundation in 2002, and State Natural Science Award, also in 2002.