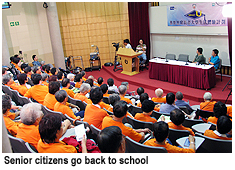 Ninety-six enthusiastic senior citizens aged between 50 and 90 graduated with flying colours from their five-day Summer Elderly Programme on 14 August, proving it is never too late to go back to school. The programme, jointly launched by CityU Professional Services Ltd (CPS), Po Leung Kuk and WiseNet Ltd, was offered once again thanks to its highly successful debut last year. Positive feedback from the general public meant 100 participants enrolled this summer, a five-fold 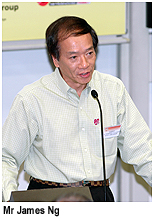 In line with the government's agenda to promote active and healthy ageing, CityU is committed to making valuable contributions to society. As a collaborative effort, the Summer Elderly Programme provided participants with an opportunity to explore life at university, and, most importantly, promoted the cornerstone concept that ageing should not be an obstacle to continuous learning and making positive contributions to society.

Mr James Ng, Executive Director of the Office of CityU Extension and Chief Executive Officer of CPS, said the courses steered clear of the theoretical and academic; instead they 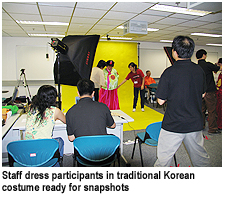 emphasized participants’ feelings, aiming to help them feel what life at university is like. “With state-of-the-art facilities at CityU and the versatility of the courses offered, we hope to assist elders’ learning in all possible ways, enhance their self-confidence and promote the spirit of life-long learning and active and healthy ageing,” he said. 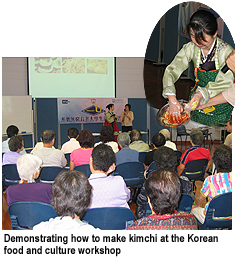 The five-day programme kicked off in early August with an opening ceremony attended by pop star Mr Leo Ku, the Honorary Chancellor of the Summer Elderly Programme. In his remarks, he encouraged the ‘senior’ students to lead an active life. The programme included a campus tour followed by interactive workshops and classes on several popular themes such as how to make kimchi, the spicy Korean dish; how to create multimedia videos and other artistic endeavours; Korean and western cultures and customs; the use of various Chinese herbs and medicines; and tips on style and grooming. As a souvenir, the participants had their photographs taken dressed in traditional Korean costume. 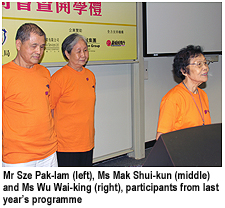 For Ms Wu Wai-king, a participant in last year’s programme, CityU had made her dreams come true. “I’ve got a very big family and we were very poor so I couldn’t go to school. I sometimes dreamed of going to school but it seemed so remote. But through this programme I feel my dreams have been fulfilled,” She said in a sharing session during this year’s opening ceremony. Ms Wu learnt a great deal about grooming, styling, and table manners for Chinese and western food. “I even know how to make soap after attending classes,” she added. 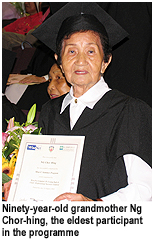 Ninety-year-old Ms Ng Chor-hing, a mother with three sons, four daughters and more than ten grandchildren, was the eldest participant taking part in the programme. “I am illiterate and feel like going to school and I’ve been getting a lot of enjoyment from the things I’ve learnt. I am so happy that all my sons, daughters and grandchildren are here with me today witnessing my graduation,” she said.

Mr Siu Yau-shing and Ms Pang Yang, a couple both in their late 60s, said they had completed primary education and were impressed by the freshness and variety of the courses. “The programme taught us many things that we never learnt before, especially taekwondo and kimchi-making,” Ms Pang said. Her husband added: “After retirement, I felt dispensable in society. But encouraged by my wife, I participated in this programme and I now feel re-energized.”