Undergraduates recruited from top mainland universities in recent years perform well in both academic studies and extracurricular activities. They have become ideal  candidates for research studies in local and overseas universities. Three final year mainland students of the Faculty of Science and Engineering (FSE), Wu Boping, Huang Yuanyuan and Liang Xiangdong, talk about their learning experience at CityU and their further academic pursuits. Their experiences have demonstrated that distinguished staff, close relationship between teachers and students, and the emphasis on whole person education at CityU lay a solid foundation for students’ further studies and career development.

A graduate of BEng (Hons) in Electronic and Communication Engineering, Wu Boping has been offered a scholarship to study for a PhD in Electrical Engineering at the University of Washington, US. “During my three years study at CityU, I was fortunate to come across some very good professors who inspired me in my studies and research. This helps build a solid foundation for my future postgraduate study,” Wu said. He gave special thanks to Professor C H Chan, FSE Dean and Chair Professor of the Department of Electronic Engineering (EE), who supervised his final-year project, and enhanced significantly his knowledge in the field of electronic engineering, and helped improve his presentation skills. 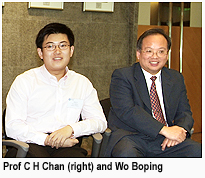 Before CityU, Wu studied in . Looking for an opportunity to study in , he applied to CityU’s EE four years ago, having learned that the department was distinguished for its well-qualified teachers and advanced laboratory facilities. During his three years in the EE, Wu was particularly impressed by the caring culture on campus and the many opportunities to apply what students have learned in class. He joined the FSE’s Industrial Attachment Scheme in his second year and was assigned to work as an intern in a company in for nine weeks. The experience broadened his horizon and enabled him to apply knowledge in a real life environment.

Huang Yuanyuan will pursue her MSc in Finance and Mathematics at in the , after completing her BSc (Hons) in Computing Mathematics at CityU. She found

the programmes offered in CityU's Department of Mathematics (MA) practical and can easily articulate with programmes in overseas universities. In her second year, she joined the Student Ambassador Scheme and helped promote CityU’s image. “I had the opportunities to get involved in community services and my Cantonese has improved a lot,” she said. Being a student ambassador, she welcomed the opportunity to visit a number of Japanese universities and corporations such as , , NHK TV and Sony Corporation last summer. The trip has broadened her horizon.

Like Wu Boping, Huang Yuanyuan was also a student of . She came to  determined to see more of the world and to develop her independence. During her three years at CityU, she has also developed the attitude and habit of self-learning. “Society is changing rapidly. Teachers at CityU always remind us of the importance of life-long learning and self-learning.”

Liang Xiangdong completed his BSc (Hons) in Computing Mathematics with outstanding academic results. He has decided to pursue an MPhil in Mathematics at CityU. He went to earlier this year for one semester as an exchange student. With his brilliant results, he would have had no problem furthering his studies at 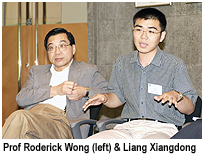 Carnegie Mellon. Instead, he chose to stay at CityU. He said, “To me, the ranking of a university is not my major concern. What concerns me more is a university’s professors, peers and learning resources.”

Previously a student of Jilin University, Liang Xiangdong was interviewed by Professor Roderick Wong, the then FSE Dean, currently Dean of Research and Graduate Studies and Chair Professor of Mathematics, when he applied for admission to CityU. Liang was grateful to Professor Wong for his personal supervision, despite his busy schedule. There are many distinguished scholars in the MA, for instance, Professor Wong is a Fellow of the Royal Society of Canada, and Professor Philippe Ciarlet, another eminent mathematician in the MA, is a Member of the of Sciences. To Liang, such academic strength is comparable to that of Carnegie Mellon. In addition, the good friends he has made over the last three years and the rich learning resources of Run Run Shaw Library are also factors that have made him decide to continue his studies at CityU.

Boping, Yuanyuan and Xiangdong are good friends. They teamed up twice to participate in two mathematics modeling contests held on the mainland and in the , and have achieved awards on both occasions. In addition to Yuanyuan, another FSE undergraduate, Zhang Yalei, of EE, will also further her studies with an MSc in Management Science and Engineering at .

During the sharing session, Professor Johnny Chan, FSE Associate Dean, added that  some 20 mainland undergraduates are admitted to the Faculty each year.  Counted among the academic elite in their  homeland, the students generally perform to a high standard. He also found them more focused on their studies. Their attitude and performance have had a positive impact on local students, he commented.