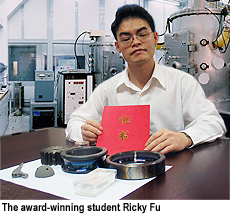 Ricky Fu, a final year PhD research student in the Department of Physics and Materials Science, was honoured with an Excellent Young Scientist Paper Award at the 2004 Chinese Materials Researach Conference, held 22 to 26 November in Beijing. “It is very encouraging to see that my research project was recognized at the conference, because it is one of the most authoritative events for materials scientists and researchers in and worldwide,” Fu said . He was among the 13 young scientists honoured in this category and the only recipient.

Fu’s research paper, Recent Developments of Plasma Immersion Ion Implantation (PIII) in Surface Modification and Engineering, examines novel approaches to treating new materials, including alloys and polymers. By applying PIII, he was able to make breakthroughs in treating new materials, especially in the field of semiconductors. PIII is an effective technique for surface modification, due to its high efficiency and large-area processing capability.

Asked why he believes he won the award, Fu said: “Perhaps it’s because I succeeded in developing a way of treating the surface of silicon that may lead to a breakthrough in the use of semiconductors in the field of bio-technology.” Through his research, he discovered that by implanting the hydrogen plasma in silicon, the silicon generated a positive bioactivity on its surface, allowing human bone structures to grow. The technique can be used to develop bio-medical material to improve the function of implants such as hip-joints and pace-makers. Other applications of his research discovery could be to improving artificial heart valves, and blood vessels for heart patients. More generally, Fu’s research in alloys, semiconductors and polymers also has great potential for application to industrial and aviation materials, including satellites.

Fu believes that science should not only exist for science’s sake; it should also be used to improve human welfare. “Although our work does not focus on creating an end product, with our modest contributions, researchers may be able to develop some scientific and technological advances which, ultimately, may help create more effective products. I am very grateful to CityU’s teachers for their support and for the University's well-equipped facilities. They have been essential in helping me to carry out my research,” he said. 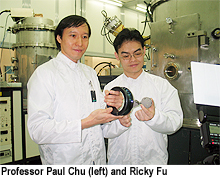 In particular, Fu extended his thanks to Professor Paul Chu, Chair Professor of Materials Engineering in the Department of Physics and Materials Science. The award-winning student has been working under his guidance since 1998, when he was a final-year student in Materials Science at CityU. Fu’s MPhil and PhD work was and has been carried out under Prof Chu’s supervision. “I have benefited so much from Professor Chu’s inspiring and open approach. He never asks students to follow his way. But rather, he allows us ample room to think and experiment and grow.”

The biannual Chinese Materials Research Conference was organized by the Chinese Materials Research Society, with an aim to promote research in the materials science on a national level. This year, it attracted more than 1,000 academics and researchers from all over the world. The Excellent Young Scientist Paper Award, set up for scientists under 35 years of age, was a highlight of the Conference. More than 700 papers were received as entries, and only 13 were honoured.