A dignified and meaningful celebration 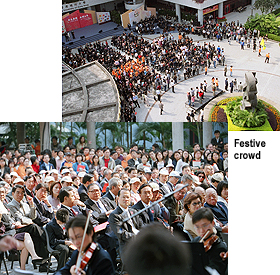 Under a bright blue Monday sky, 20 December, hundreds of staff, students, alumni and friends of CityU gathered at noon in the for the 20th Anniversary Celebration. Starting with congratulatory messages from 20 international staff and students dressed in their national costumes, the event revealed the cultural mix and global-oriented ambience of CityU.

“Cultural diversity of the student body is an important element for nurturing the international outlook of the students,” said Sir Gordon Wu, Council Chairman, in his welcoming address. “The presence of non-local

Sir Gordon recounted CityU's contribution to the provision of quality education and impressive achievements over the past two decades. “With the dedication and concerted efforts of staff, students and alumni, I am confident that CityU will continue to 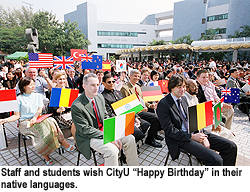 intensify its strength in increasing its competitiveness in the international arena and expand its contributions beyond the campus into the community, across the nation, and abroad,” he said.

In his address, Professor H K Chang, President, recounted how the CityU community had traveled hand in hand over the past two decades with the support of the local community and government. “In the past 20 years, CityU has gone through the kind of changes that any other university may not have the chance to go through in 200 years,” he said. 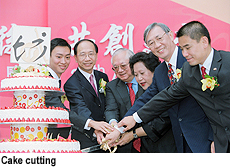 He also recalled how the University started planning for the 20th  anniversary a year and a half ago when it was facing crisis such as the SARS and budget cut. The University decided to go for low budget, dignified and meaningful celebrations which were achieved with the efforts and dedications of the CityU community. With a deep bow, he saluted all staff, students and alumni who had contributed to making CityU what it was today. 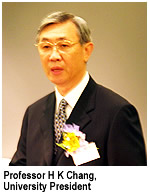 CityU will offer educational programmes that were professionally oriented, dedicating itself to research that could be applicable to society and that would have ’s interest in its heart, he said. "CityU is in , for and by ," said Professor Chang. was the most international city of , and a gateway for the outside world to see, understand and go into , as well as a bridge for to reach the outside world, he said. To serve well, CityU would endeavor to make an international city in , to be a place where local, mainland and international students can mingle, interchange and grow together.

Professor Chang proudly shared the three gifts that the University received in its anniversary year: the new role statement by the University Grants Committee (UGC); the top world ranking by the UK’s Times Higher Education Supplement and by the Shanghai Jiao Tong University; and the third and most important—harmony—with which CityU could achieve everything. “Through trials and tribulations, CityU has pulled together, found its vision and common denominator and cohesion,” he said. “I invite everyone to return in 20 years, let the next 20 years and the past 20 years of CityU meet right here today,” he said. 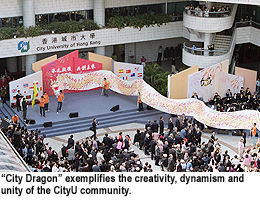 Solidarity of the CityU family was vividly demonstrated by the “City Dragon” composed of over 10,000 handprints made by staff, students, alumni and friends. Over 70 students danced the “City Dragon” which is 217.85 metres long and with an area of 326.775 square metres round the during the Celebration.

“The ‘City Dragon', initiated and organized by the students, aims to exemplify the creativity, dynamism and unity of the CityU community,” said Kelvin. “I have confidence that the CityU family will continue to work hand in hand for CityU’s bright future.”

Exchange students Pierre from France, Lenny from and Neil from , shared the joy of CityU’s achievements and found the dragon very impressive. “The dragon was really creative,” said Dr Y C Chan, Department of Management Sciences. “It added 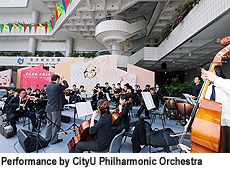 flavour and colour to the Celebration.” Mr Chan Shek-fai, staff in the Facilities Management Office, said that the dragon demonstrated the unity of all CityU members.

Celebrations by students, alumni and staff

The Celebration also featured performances by the CityU Philharmonic Orchestra and pop singer and alumnus Mr Edwin Siu. “I am proud to be part of CityU and have the chance to take part in the Celebration,” said Edwin. “I hope that all students will continue to maintain their affiliation with the alma mater after graduation and show their support.”

Mr Patrick Lee, Chairman of the CityU Alumni Association, thought that the celebrations were a great success. He hoped CityU would continue to rise up in the world rankings. In celebration of the 20th anniversary, the Alumni Association formed the Proud of 20 group that pulled together CityU alumni, students and staff to take part in the 100km Oxfam 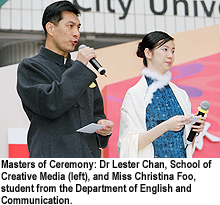 Trailwalk to raise money for charity and rekindle a sense of belonging to the University. “I am grateful to the University’s support and dedication of the alumni,” said Patirck. He hoped that alumni could continue to foster links with and support to CityU.

The Celebration also included the presentation of awards in appreciation of staff support to the “Turn One to Five” staff fundraising campaign launched by the Development and Alumni Relations Office in December 2003. Matching donor for the campaign Mr Michael Kao Cheung-chong, and Council member and matching donor Dr Dennis Sun, presented the awards for the 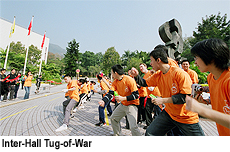 As a prelude to the Celebration, an Inter-Hall Tug of War was held in the morning. Professor Chang presented the best cheering team award to Hall 6, and the prizes for the second runner up , first runner up and champion to Halls 4, 5 and 8 respectively. 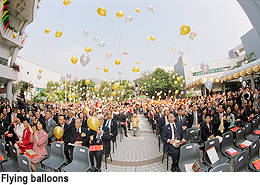 The Celebration reached another climax after the cake-cutting and ceremonial toast as a startling blast of confetti from paper cannons and flying balloons filled the with colours and joy. The festive crowd and guests enjoyed a light buffet, which featured an international cuisine of Asian, Chinese and Western food.

For a recap of the celebration, please click video.