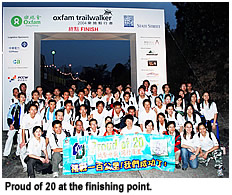 Cheers rang out when the plucky athletes from the Proud of 20 team crossed the Trailwalker finishing line in unison at dawn on 7 November.

The charity walk, from 5 to 7 November, has marked a record for the University when, for the first time in the University’s 20-year history, more than 200 participants, including alumni, students and staff, took part in organizing the event. A core team of Citywalkers has been formed and their rigorous six-month training programme paid off as 30 athletes completed the grueling 100-km hike across the at 6.30am on Sunday, in a time of 43.5 hours. 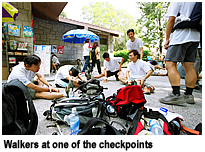 Not only had they finished the task, the trekkers had worked for a common cause: building solidarity among CityU people, raising funds to help society, and presenting a gift to mark the 20th anniversary of the University.

Finishing the hike together was a daunting challenge for the Citywalkers, half of whom were students and the other staff and alumni. Less than one-fifth of the 30 athletes had participated in the Trailwalker before, and the age difference between the youngest and eldest walkers was 35 years. 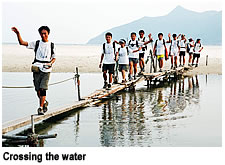 “I never imagined I could complete the walk,” said Boris Wun, a Year 2 Associate Degree student majoring in Building and Surveying. “That is really a record for myself and I’m so glad that I’ve made it for CityU.”

With just 30-km to the finishing line, Boris had muscle strain and found it difficult to continue. “At that moment, I told myself I should not give up. By slowing my pace and with support from teammates, I could complete the trek,” he said. 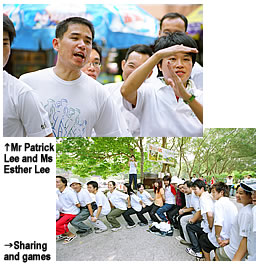 The participants were divided into four sub-teams and each team comprised of members with different strengths and skills. “Athletes did vary in speed at some points, but after a short rest, all of us could start again together,” said Mr Patrick Lee, one of the Citywalker coaches.

“Andour logistic team tried all means to support us,” he added. Massages, food, drinks, and encouraging rounds of applause from the Organizing Committee (OC) and guests along the route lifted the walkers’ spirits.

Ms Esther Lee, one of the walkers and staff of the Student Development Services, gave a spiritual boost to the team by providing "chicken soup", such as sharing and inspiring games, to release walkers' anxiety and develop mutual trust.

“During the long hours of the walk, the athletes didn’t sleep and the hiking was really exhausting physically,” she said. “Members played different roles such as energizer, follower, information provider, or leader, to support each other.”

Esther, experienced in the area of student development, reflected that the event provided a good opportunity for her to know more about herself and the remarkable potential of her students and colleagues. “The challenge is not the 100-km, but how to work with others for a common goal and make the whole process an enjoyable one.”

Rekindling a sense of belonging 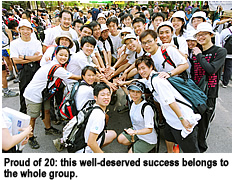 The event also enhanced relations among alumni, making the alumni family bigger and stronger. Livia Lee and Agnes Chan, members of the Proud of 20 OC, said they had been quite detached from the alma mater after graduation. But Proud of 20 rekindled their sense of belonging with CityU. Livia, responsible for logistics and promotion, said she didn’t notice there was such a strong alumni association. Through providing support, the event has broadened her connection with more CityU friends.

Agnes, responsible for fund-raising, said: “The most challenging job is to explain our mission and inspire people to sponsor.” Together with the others, she spent many nights doing follow-up work, through which she has gained a lot of new friends. “I didn’t know that as an individual, I would contribute to the University in such a way,” she said. 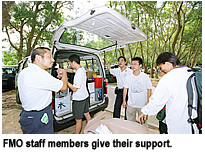 Boosting on-site spirit should also be attributed to staff supporting the logistics team. Mr Kingston Sun, Facilities Manager, and the driving team of the Facilities Management Office, assisted in transporting helpers and food from one checkpoint to another. “The athletes are so brave walking overnight. We just contributed what we could to help them,” said .

Team spirit was riding high in the build up to the race, especially after the kick-off ceremony, said alumnus Dr Bryan Wong, Chairman of Proud of 20 OC. “We received a lot of support from the University, from management and academics to general staff and students, who all contributed their expertise and kindness to make the event a great success.”

He said all participants would treasure the friendships made during the event, but that more importantly, Proud of 20 helped motivate people to think about their relationship with the alma mater and recognize that every one can contribute their part for the well-being of the University.

“Many members didn’t know each other at our first briefing,” said Dr Wong. “Now as we have overcome our differences and developed strong ties, Proud of 20 will definitely be part of our collective memory.”

Proud of CityU, Proud of yourself
'Citywalker' on the move for charity