Reaching to the stars with satellite communications

The launch of three Beidou satellites into orbit, two in 2000 and one in 2003, has opened a new chapter in 's satellite communications development. It spawned a new industry of navigation products for use with the Beidou Global Positioning System (BGPS) and CityU's wireless communications experts are making their mark in this industry.

By setting up a joint venture with the GoldTel Group, one of the forerunners in satellite communications technology and navigation products in China, CityU

has tapped into about 25% of the of the market in key BGPS components, namely antennas and power amplifiers. Established in December 2002, Shenzhen Goldradio Communication Co Ltd, a RMB 2.5 million yuan start-up by CityU and the GoldTel Group, recorded a  turnover of RMB 3.8 million yuan in 2003, supplying BGPS subsystems (comprising circularly polarized antennas, power amplifiers and radio frequency transmitters and receivers) to its parent company. Sales prospect in 2004 looks even brighter, with orders of no less than RMB 10 million yuan already in sight.

Dr Xue Quan, Associate Professor of the Department of Electronic Engineering, played a pivotal role in mediating the joint venture. Before he came to in 1999, Dr Xue was a professor at the and Technology of China, in , closely affiliated with the GoldTel Group. While working at CityU in 2001 as a Senior Scientific Officer at the Wireless Communications Research Centre, his expertise in microwave and millimeter circuitry was sought after by GoldTel, which offered him a senior position in the Group. Instead of leaving CityU, Dr Xue considered the opportunity for exchange and collaboration between the University and the high-tech enterprise. He chose to stay at CityU and eventually his ideas bore fruit in a joint venture –the Shenzhen Goldradio Communication Co Ltd. The GoldTel Group holds a 51% stake, CityU and eight professors hold 39%, and the rest of the 10% is set aside for stock options and bonuses for company employees in the future. The company is essentially a spin-off of the brainchild technologies of Dr Xue and two other CityU researchers, Chair Professors Luk Kwai-man and Chan Chi-hou, both from the Department of Electronic Engineering, in the respective fields of antenna and RF circuitry.

Unique technology at a competitive price 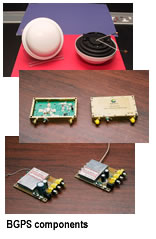 What sets CityU apart from other suppliers is a unique filter device embedded in the amplifiers, developed by Professor Chan and Dr Xue. The filter enhances the quality of signal transmission and reception, with stabilized performance under a wide temperature range, from +50 to -40 degrees Celsius. “Our amplifiers work equally well in the sweltering heat of as in sub-zero temperatures in ,” said Professor Chan, the company’s Vice Chairman.

Combining the latest technical know-how and almost 20 years of research experience in patch antennas, Professor Luk, Shenzhen Goldradio’s Chief Technical Officer, developed the circularly polarized (CP) antennas specifically for the Beidou satellite system. Unlike patch antennas, which are primarily used for receiving signals, the more sophisticated CP antennas can both receive and transmit signals. The zone of signal coverage is much wider.

Antennas, RF circuitry and base-band circuitry are the indispensable components of any wireless communications system. Shenzhen Goldradio focuses on the antennas and RF circuitry components, which are the more technically advanced subsystems. “It was a demanding project and meeting our client’s requirement seemed impossible at the beginning, but we were able to deliver what the Group wanted after some fine-tuning and modifications on our existing technologies,” Professor Luk said.

Prior to the setting up of Shenzhen Goldradio, Professor Luk’s patented technology behind his wideband patch antenna with L-shaped probe launched another spin-off on the mainland. Yantai Hi-Gain Hi-Tech Co Ltd, a joint venture between CityU and the state-owned Shandong Hi-Tech Investment Corporation, produces indoor and outdoor antennas for wireless communications for the mainland market. It also supplies Shenzhen Goldradio with some of the antenna components for other GSM and CDMA application products. 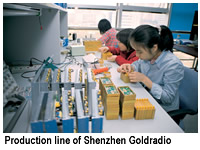 The Beidou satellite system can register the precise ground location of any object with the BGPS navigation unit installed. This function makes it a very useful device in land, sea and air transport management, mobile communications, and security.  It fills the telecommunication void in a vast country like where many remote areas are still inaccessible by mobile phone. “Just imagine how big the market could be if every single vehicle in had a navigation system installed,” Professor Luk suggested. Indeed, the market for Shenzhen Goldradio products is by no means restricted to ; their products can cater to any client using Beidou satellites in .

With bright prospects and guaranteed sales to its parent company, the founders of Shenzhen Goldradio have high expectations—they hope the company will be listed on the Hong Kong Stock Exchange in three to five years’ time. The company is already making a handsome profit, but the founders have a vision beyond money. “What we want is a viable high tech company that has a future, that is sustainable, so that, in the end, we can employ more of our graduates,” Professor Chan said. In a few years, they plan to open a design house in for R&D and innovative input, while the Shenzhen operation will focus on production.

The professors find the process of technology transfer an enriching learning experience. Through the joint venture, they keep their applied research projects aligned to the needs of the real world. Through the business connections of Shenzhen Goldradio, they have obtained research contracts amounting to RMB 400,000 yuan for CityU’s Applied R & D Centre in Shenzhen. “Ideas and applications are mutually reinforcing,” they said. “We learn a lot through the process of meeting the specifications of our clients, which often turn out to be a source of ideas for future applied research projects.” 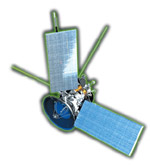 People need to know where they are and where they are heading. In the past, we used the North Star and the compass for navigation and positioning. Today, we use high-precision technology that gives us instantaneous information—satellite  communications.

The launched the world’s first global positioning satellite in 1978. “Global Positioning System”(GPS) now commonly refers to a worldwide radio-navigation system formed by a constellation of 24 satellites and their ground stations developed in the . These satellites travel around the globe at the speed of 12 hours per orbit. GPS uses these satellites as reference points to calculate positions on earth. As a counterpart to GPS, developed its Global Navigation Satellite System (GLONASS) in the 1980s, using similar operating principles.

, too, has developed its indigenous satellite navigation system, the Beidou, which literally means the North Star. The first Beidou satellite was launched in 2000. Based on a proposal by ’s renowned scientist Professor Chen Fangyun in 1983, Beidou operates as a “twin-star” regional navigation system using two geostationary satellites, transmitting signals with ground correction stations. Beidou is more economical in operating cost, and its accuracy has been proved to be comparable to GPS. The system initially covers the region. It may be developed into a fully global navigation system when complemented by satellites travelling in orbit around the globe.

These days the civilian use of satellite communications technology is expanding rapidly. It is finding its way into cars, boats, planes, construction equipment, farm machinery, even laptop computers. Scientists, hikers, sailors, pilots, drivers, surveyors, and people from all walks of life are using GPS in ways that make their work safer and easier. By and large, navigation products that use any satellite system for positioning and mapping are commonly referred to as GPS products. In the future, it is expected to become a daily amenity as common as the telephone.