An international symposium promoting the exchange of ideas on the economic, political social and cultural developments arising from the changing relations between and was held at CityU March 24-25. " and : Challenges, opportunities and the reconstruction of Southeast Asian Chinese ethnic capital" was co-organized by CityU's Southeast Asia Research Centre (SEARC) and the Center for Southeast Asian Studies (CSAS) at Xiamen University. 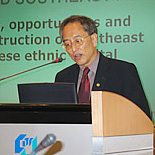 "The symposium marks a in a longstanding collaboration between CityU and ," said Dean of CityU's Faculty of Humanities and Social Sciences Professor Matthew Chen, welcoming some 20 world-renowned scholars from the Mainland, , , , , and the . Apart from its strategic economic significance, "the great cultural and ethnic variety of can enrich and deepen our understanding and appreciation of the human family as a whole," he added.

With ethnic Chinese capital investment growing throughout the region, a tremendously interactive regional market is emerging. How and tackle the issues and changes became the common focus of many of the speakers. " has historically played a major role in ," said CityU President Professor H K Chang, "But I believe history shows that it never really had any territorial intent on its Southeast Asian neighbours, although it's still sometimes portrayed as such by the media. Resolving this is the challenge for both Chinese diplomacy and the international community."

The symposium was conducted in four sessions covering three themes: understanding regionalization and ethnic capital; regionalizing cultures; and regionalizing economies. Topics discussed included "Towards a cultural economy of regionalization: Ethnicity and capital in the changing relations between and ", "Change and continuity in Southeast Asian Chinese capitalism", and "Mainland 's invested enterprises in 's stock market". A follow-up symposium, also jointly organized by SEARC and the CSAS, will be held at in September. Both events are sponsored by the Japan Foundation.

Established in 2001, SEARC is a local pioneer in developing studies and the only research centre of its kind in . SEARC has established a strong relationship with its counterpart, the CSAS, at . Professor Zhuang Guotu, Director of the CSAS, is a member of SEARC's International Advisory Committee.