Around 40 students of the Division of Social Studies (DSS), who participated in a 10-day trip to Taipei and Beijing, shared their experiences on 12 March. The trip was a soul-searching journey during which students compared youth behaviour of Hong Kong, Taipei and Beijing, and reflected on their own roles in society.

The project, titled "Youth and Society in Beijing, Taipei and Hong Kong", aims to motivate students to learn independently through group projects. It is sponsored by the Quality Campus Life Fund and the College of Higher Vocational Studies (COL). Topics include the behaviour of juvenile night-drifters, civic consciousness, and teenagers' views on foul language, sex, slimming, and pop music.

Youth and Society
After three months' research and preparation, the students went to Beijing and Taipei for on-the-spot investigation in January. "We hope to bring the students to an unfamiliar culture and encourage them not to measure what's right and wrong from a strictly Hong Kong point of view,"

said Mrs Fanny Liu, Senior Lecturer of DSS and the Project Coordinator. In their study on juvenile night-drifters, the students compared the reasons behind the phenomenon of the three cities and analyzed how the government, family and society could help the juveniles. They came up with "Five Nos" for today's teenagers -- No Discrimination, No Prejudices on Minority Groups, No Giving Up, No Labelling, and No Selfishness. "As future social workers and community service providers, we strongly believe that these values should be deeply rooted in our heart," said Ivan Chan, year two student of DSS, in his presentation. "We also hope our findings can stimulate our peers to reflect on our role in helping society."

Anne Kwok, another year two student from the same team and a member of the Project's Student Organizing Committee, said through talking to night drifters in the three cities, her team found out that they also had their needs and goals, but they were looked down upon by society. Her team approached voluntary organizations such as Youth Outreach for information about Hong Kong. During their Beijing and Taipei trips, the students visited the China Youth University for Political Sciences and the Soochow University, respectively. They presented their findings to the university students there and exchanged ideas with them.

Self-motivated Learning
A strong believer in motivating students to learn on their own, Mrs Liu stressed that the topics were initiated by the students and DSS academic staff are facilitators to help students broaden their minds. Application for the Project started in September last year and a Student Organizing Committee was formed to encourage students to contribute inputs in planning and coordination. Students with different majors were grouped together for more stimulation. Students presented their topics in workshops and received panel adjudication by experienced social work practitioners. The trips

to Beijing and Taipei were led by Mrs Liu and Mr Mok Hing-luen, Senior Lecturer of DSS, respectively. During the trips, sharing sessions were held frequently for students to reflect what they had learned and brainstorm new ideas. She hopes the students can stay motivated and apply the experience in their future study or career.

Apart from self-motivated learning, the project also had fruitful gains in exploring the differences between the three places, reflecting how Hong Kong young people perceive themselves and others.

A group of students pointed out that the

slimming products and promotion packages in Beijing and Taipei carried more positive messages than in Hong Kong, where "getting slim" has been commercialized. They advised Hong Kong teenagers should learn to think independently and the media should report more on healthy ways and positive attitudes towards slimming, rather than simply following promotion of slimming companies. 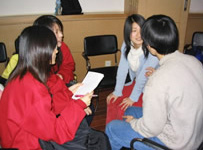 On pop music, students found out that Beijing teenagers were less keen on pop music while Taipei youth were concerned about the message behind the music. However, Hong Kong people seemed to have more choices in genres of music and a broader exposure to different cultures.

The presentation was well received by the student participants, COL academic staff, secondary school teachers, and social workers. "The most important thing about education is to nurture a self-learning attitude and abilities to students. Nowadays, knowledge itself is not enough. The key is to find out the learning opportunities, make good use of them and enjoy the process," said Dr Wong Chan Pik-yuen, Acting Head of DSS, in her closing speech. "Through the project, the students have equipped themselves with creativity, communication skills, and a new way of thinking."