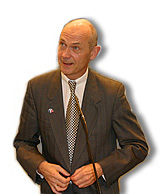 China, as a new member of the World Trade Organization, has, by and large, complied with its membership duties, according to Mr Pascal Lamy, European Union Commissioner for Trade, who spoke at City University of Hong Kong on 12 March. But there seems to be a tendency on China's part to resort to "innovative" non-tariff trade practices that may not be in sync with the WTO principles.

Some of these issues come from China's provinces, whose adoption of non-tariff trade practices may not appear as "blinks on Beijing's radar," Mr Lamy said in his lecture on "The European Union, Hong Kong SARS and the World Trade Organisation."

Organized by CityU's APEC Study Centre, Research Centre for International Economics and WTO Law and Dispute Resolution Centre (WTODR), the talk couldn't have come at a more appropriate time. The Doha Development Agenda of the current WTO round of negotiations is now out of the Post-Cancun era and in the pre-Hong Kong era, Mr Lamy once said to a gathering of trade officials in New Delhi. Hong Kong is the site of the next WTO ministerial meeting later this year. There is a certain expectation, with WTO members' commitment, of some breakthroughs in the trade talks.

The EU, in the post-Cacun talks, reiterated a number of principles in order for the talks to go forward. These are, according to Mr Lamy: commitment to multilateralism, flexibility in looking at individual agendas instead of just the big issues, and rule-making to ensure market access, in particular, for developing nations. "EU will show a bit more flexibility. It needs to reassess priorities, in order to contribute to a successful relaunch of the Doha agenda," Mr Lamy said. Issues on agriculture, tariff rates on industrial products, service trade and development will dominate the agenda at the coming meeting in Hong Kong.

Mr Lamy has a "varied and distinguished" career in business, finance and trade, said WTODR Director Professor Peter Malanczuk , who introduced the speaker. Mr Lamy was appointed to the European Commission in July 1999, and, in September the same year, he was confirmed as Trade Commissioner by the European Parliament. Before his postings at the EU, he served as Chief of Staff to Commission President, Jacques Delors from 1984 to 1994. In 1994, he worked for Credit Lyonnais and helped to restructure France's leading bank before it was privatized. Mr Lamy is a graduate of France's leading business school, the Ecole des Hautes Etudes and France's top civil service college, Ecole Nationale d'Administration.

On his official visit to Hong Kong and Macau, Mr Lamy will meet Mr C H Tung , Chief Executive of Hong Kong, and Mr Henry Tang , Financial Secretary. He will also deliver a speech to the European Chamber of Commerce on "EU-Hong Kong Trade Crossroads." Mr Lamy's last visit to Hong Kong was in 2001, but he finds Hong Kong as vibrant as ever, despite SARS and an economic downturn last year.