The Hong Kong Convention and Exhibition Centre was brimming with people of all ages and nationalities from noon until 4 p.m. 7 February, and many of them had legal activities on their minds. Whether it was to land a summer placement with Clifford Chance, seek a career opportunity or investigate law programmes, some 100 people milled about Room 201, the venue for this year's Law Fair. CityU's School of Law (SLW) was represented, along with Hong Kong University and numerous international law firms, such as Deacons, Baker & McKenzie, and Minter Elison.

The SLW's Juris Doctor (JD) degree made its debut to a warm reception. As a first law degree for graduates in a non-law discipline, this new programme's attraction lies in the fact that it provides a fast route to an internationally accepted professional degree for leadership roles in commerce, government, and media, among others. "For example, my ambition is to become a Legco member," one student said, "and a law qualification is important for people in politics." The JD is also recognised for the purpose of applying for entry into the Postgraduate Certificate in Laws (PCLL) programme. 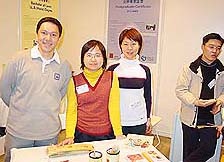 Perhaps most notable of all was the increased interest in the PCLL, already popular among working professionals studying in Part-time Mode. A part-time student remarked that he also enjoys an active social life with classmates; it's proving to be a good way to network and develop contacts. The PCLL prepares students holding a law degree or equivalent qualification, (CPE, for instance), to enter the legal profession as trainee solicitors, or as pupil barristers. The degree is looked upon favourably by students keen to gain practical experience. "One student told me today that her friends advised her to take up the PCLL at CityU rather than elsewhere, so she could try her hand at legal writing, such as actually drafting a contract," first-year PCLL student Frederick Chan explained. The practical aspect of the programme is appealing to students who want to start strong in this highly competitive field. 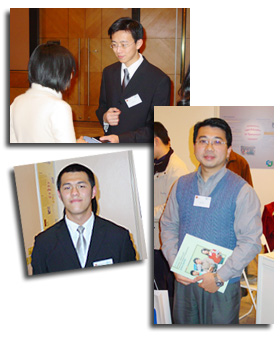 The CityU booth was manned by several student volunteers, including Colin Sit, a part-time student presently working for the international law firm Herbert Smith, and Shen Han, an MPhil student from Shanghai. "By studying in Hong Kong, I hoped to gain exposure to more international law firms and cultures than I could in Shanghai," Shen said, "and the University's Chinese and comparative law research provides just that. CityU's mainland ties give the University a distinct advantage." When not busy explaining programmes and application procedures to prospective students, student volunteers Charles Chan and Nicky Tse took time to wander among the booths of the influential law firms distributing pens and pamphlets, and were pleasantly surprised to learn that an impressive number of prestigious firms have hired CityU graduates as practicing lawyers on a long-term basis.

According to SLW staff member Mary Chan, "Over 40 people had visited our booth and made enquiries within the first three hours of the Fair¡Xmore than last year."

Apparently some of them even wanted to apply on the spot, and all the application forms were snapped up. The law profession is more attractive than ever in Hong Kong, and the convenience and ambiance of the venue served to raise the profile of the annual Law Fair. The organizer of SLW's presence at the Fair this year was Assistant Professor Mrs Sharon Melloy, Solicitor, who is also a Committee Member of the Hong Kong Family Law Association.