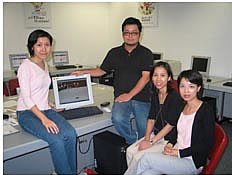 "Snack DIY" and "Hong Kong Grocery Store" unlikely titles of prize-winning websites? CityU participants in RTH's Third Multimedia and Creativity Gallery¡XAsian Inter-University Multimedia Design Competition impressed the judging panel with these themes. And the producers of the two websites walked away with the Championship and My Favourite Award, respectively, in August.

Gloria Cheong, Jonis Wong, Teresa Poon and Peter Tse, the designers of "Snack DIY", are master's degree students in the Department of English and Communication. Their website featured recipes and ways to make traditional Chinese snacks such as red bean pudding, shark fin soup, biscuits with maltose, and glutinous rice dumplings that are sold by street vendors. Unlike websites that rely on text, they gave users plenty of visual and audio stimuli: cooking procedures were explained in flash movies supplemented with audio script. All in all, simplicity contributed greatly to the website's success. 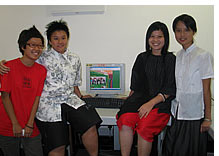 The website, "Hong Kong Grocery Store", was the work of four undergraduate CityU students: Oscar Pang , Sandy Fung , Nora Tai and Cho Hei-man , all from the School of Creative Media. Based on the traditional Chinese notion of "home's seven essential items"¡Xfirewood, rice, oil, salt, sauces, vinegar and tea, sold at grocery stores, they decided to create a website to Hong Kong's indigenous culture of bygone days. The students said the competition helped them to practice planning and developing a website. "Whenever we encountered any technical difficulties, our tutors helped us our," Cho said.

Students from eleven universities in the Asia-Pacific region participated in the contest, and the 55 resulting websites were assessed on their creative concept, expression of ideas, and content.