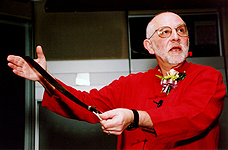 Abstract concepts of physics and mathematics are hardly the kind of topics that fill a room and thrill on audience. Professor Sir Michael Berry's lecture on the "seven wonders of physics" at on 18 February was, however, nothing short of a small wonder itself. Not only was the Multi-Media Conference Room packed to the brim with an audience of 500, many of whom had travelled from other universities across the city, but every pair of eyes stayed glued to the charismatic speaker. Introducing Sir Michael to the audience, Professor Roderick Wong, Dean of Faculty of Science and Engineering, said his eminent stature as a physicist and mathematician was responsible for the huge turnout.

Delivering another in the series of CityU's Distinguished Lectures, Professor Berry, renowned physicist and mathematician, explained that his "non-technical" talk was premised on the notion that the "simple, beautiful ways of nature can well illustrate the abstract, theoretical ideas of physics and mathematics". Sir Michael tackled his seven wonders one by one: moon-driven tidal waves, light interference in rainbows, the one-way spinner, the green flash in sunsets, quantum mechanics in prime numbers, water swirling down a plughole, and the twists and turns of a belt to show quantum indistinguishability.

Drawing on easy-to-find phenomena, Sir Michael took the audience on a journey that traversed the wide expanse of classical and quantum physics, covering topics ranging from gravity, optics, symmetry breaking and quantum mechanics to the enigmatic Riemann's hypothesis.