Faultlines in the Islam Ummah

In the second part of the Islam symposium, speakers focused on several issues related to perceived faultlines running through the Islamic world, drawing together studies from a diverse collection of fields of enquiry including politics, sociology, anthropology, theology and history.

The origins of these faultlines can be traced back to anti-colonial movements in the late 19th and 20th centuries, according to Dr Vivienne Wee, an Associate Professor in the Department of Applied Social Studies at . In her talk, "Sacred Worlds and : the Islamic Governance of Gender and Everyday Life in East and ," Dr Wee explained that the key date to consider is the 1874 Treaty of Pangkor.

Under this treaty the British forced the sultanate of Perak on the to relinquish political and economic power. Only autonomy over religious affairs and customs remained. The treaty helped usher in the age of imperialism and led to a major period of European colonial expansion in .

Colonial powers, especially the British, followed a pattern of government popular in post-Enlightenment European nations, one in which the secular state was given the power to rule, according to Dr Wee. "Consequently, anti-colonial feelings among those stripped of power became politicized into Islamism, a movement known variously as political Islam, Islamic revivalism, Islamic fundamentalism, or Islamic radicalism."

Within Islamism, said Dr Wee, there are three political responses: the Muslim secularist who does not wish to engage in Islamic discourse, the Muslim reformist who wants to modernize Islam and who takes the faith seriously but critically, and the Muslim revivalist who wants to return to an idealized Islamic state where the Qur'an rules as the single point of law.

People such as Sayyid Qutb (AD1906-1966), the Egyptian fundamentalist scholar said to be the inspiration behind much of Osama bin Laden's activities, represent the third group, intellectuals who think Western colonization had de-Islamized Muslim society and who want to create "the Kingdom of God on earth" by removing the secular state.

Although membership of this group is limited to a minority of Muslims worldwide, members are "vocal, visible and organized," maintaining strong anti-Western feelings in their quest for an Islamic state.

The secular vs the theocratic 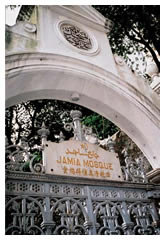 The Treaty of Pangkor was also used as a stepping stone into issues concerning the state and status of Islam within the Malaysian government and constitution in Dr Norani Othman's talk on "The Middle Path in Malaysia: Tensions Between Secularism and Theocracy." The thesis of her talk rested on the disquiet that emerged within after Prime Minister Dr Mahathir Mohammad declared in July 2001 that is an "Islamic state", a statement that led many Malaysians to voice concerns about possible political and human rights implications.

The Associate Professor from the University Kebangsaam believes that is currently neither a "fully fledged Islamic state nor a wholly secular state." It has been described in the past as a "hybrid" state that permits legal pluralism and permits the existence of parallel legal systems-common law and Muslim laws-and asserts the primacy of Islam.

Consequently, critics of the government believe Dr Mahathir's statement runs counter to the Malaysian constitution. In secular states, there is no prescribed religion, yet is certainly a predominantly Muslim country. But despite the process of Islamization that started in the early 1980s, the Malaysian Constitution has not been amended to declare an Islamic state or to raise the Sharia laws-the legislative part of the Muslim religion as stipulated in the Qur'an-above the Constitution. The Prime Minister's statement worries non-Muslims in and raises legal and constitutional issues, since he is contradicting the dualistic constitutional features of the Malaysian state by declaring an Islamic state.

The "middle path"-the tough balancing act must maintain between the secular and the theocratic-is vulnerable to competing ethnic politics and the politics of cultural identity, said Dr Othman. What is needed, she concluded, is a process of democratization that guarantees religious freedom and acts as a preventative measure allowing the continuation of the "middle path". 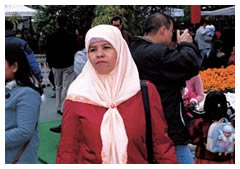 The problems faced by Muslims living in non-Muslim countries was a recurring theme, one that Dr Saroja Dorairajoo and Professor Abhoud Syed Lingga explored in their talks on the state and status of Muslims in present-day Thailand and the Philippines, respectively. Dr Dorairajoo, Assistant Professor of Sociology at , argued that there is nothing worrying about the state or status of Islam in , despite reports to the contrary. In the past, it has been said that Thais are intolerant of Malay-Muslims living in Pattani, Yala and Narathiwat provinces in the southernmost parts of , where 70% of 's Muslims live. Some commentators have reported that these Muslims, who retain strong cultural and linguistic links with , are violent and exclusive, and the Malay-Muslims report that Thai government policies are often racist and work to the detriment of Malay-Muslim culture and language.

However, Dr Dorairajoo said that Malay-Muslims have adopted measures that have allowed for the continuing survival of Islam in Thailand and that this is evidence to support a more general claim that Islam is not a rigid faith incapable of surviving in a pluralistic environment but, on the contrary, a faith strong enough to adapt within non-Muslim cultures.

Malay-Muslims have made a number of cultural compromises regarding food, schooling and ethnic identity. For example, Malay-Muslims in refer to themselves as "Thais with Malay background" to avoid re-igniting the ethnic clashes.

In addition, "many Malay-Muslims look to the model of the Chinese Thais who have adopted Thai names and adapted their culture to the large social environment yet retain a sense of ethnic identity," said Dr Dorairajoo.

Professor Lingga, Executive Director of the in the , discussed the Muslim minority in and Sulu in the southern and warned that it was a matter of some urgency that the problematic relationship between the Muslims and the government be addressed. Currently, Muslims in the do not enjoy the levels of freedom they feel that they deserve. Autonomy is not working since commercial and geopolitical factors mean that the Philippine government wishes to maintain a commercial and security presence in and Sulu. Consequently, the government force has used to crack down on separatist movements such as the Moro National Liberation Front (MNLF), increasing the possibility that the Muslims will turn to the global ummah for support. "Muslims should be given the option to define their political status because this is the essence of democracy," said Professor Lingga.

Professor Dru C Gladney, from the Centre of Chinese Studies at the at Manoa, and Mr Yip Wai Ho, a PhD candidate from the Hong Kong University of Science and Technology, continued the exploration of the Muslim experience within non-Muslim countries, this time focusing on mainland and .

In his research, Professor Gladney claimed that the experience of the Muslim minority in China-a group he believes is the most threatened minority group in East Asia in terms of self-preservation and Islamic identity-highlights the extent to which Muslim groups reconcile their Islamic culture to the culture of the host society. After all, he pointed out, Muslims have lived peacefully in for hundreds of years. However, the issue of oil meant the mainland government suppressed calls for autonomy in predominantly Muslim Xinjiang province and this was the cause of much ethnic tension, he argued.

Mr Yip talked about Muslims in Hong Kong, claiming there have been changes in the way Muslims are treated in the Special Administrative Region since the British handed the territory back to China in 1997 and that Hong Kong Muslims are being pushed to the periphery of Hong Kong society. Hong Kong is insensitive to Muslims in terms of healthcare, education and locations of prayer, and Hong Kong is less accommodating towards Muslims than before 1997, said Mr Yip. "Hong Kong cannot claim to be a world city if it lacks a multicultural understanding." 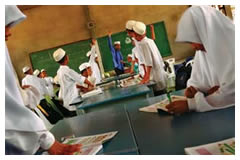 Another central theme running throughout the discussions on faultlines within the Islamic societies in Southeast Asia and China was that of language. One of the problems is that Western academics and media construct the Islamic world from a Western point of view because of the limitations of language and translation. Inevitably, this leads to misconception and misunderstanding. This issue was raised during Dr Julia Day Howell's talk on "Sufism in Indonesia". Dr Howell, a senior lecturer in the School of International Business and Asian Studies at Griffith University, Australia, spoke about the apparent anomaly of an urban Sufi revival in the last decades of the 20th century among Indonesia's educated elite, given that Sufism was associated in the past with a retrograde cultural remnant from peasant society.

Greater access to resources and adult education combined with a need among certain strata of Indonesian society for deeper spirituality has fed this revival, according to Dr Howell.

The problem of language arose when Dr Syed Farid Alatas, Associate Professor in the Department of Sociology at the , pointed out that the term Sufism does not exist in Islam, a factor that probably contributes to misconceptions about Sufism, in particular that it represents a school of thought and a brand of Islam. For example, by referring to Sufi prayers a distinction is made between Sufi prayers and, presumably, Islamic prayers, a distinction which does not exist within the Islamic frame of reference, according to Dr Alatas.

Dr Alatas made the point that academics often use tools and concepts from the West to analyze Islam and that often these tools and concepts fall short of accurately conveying the same frame of reference as perceived by Islamic scholars using alternative, less Westernized means of analysis.

In an open discussion summing up the theme of faultlines and movements, the speakers looked at the tensions between the West and Islam. Dr Daniel Bell, Associate Professor in CityU's Department of Public and Social Administration, suggested that the liberal West should look within itself and reflect on problematic issues such as high rates of divorce, high levels of crime and foreign policy in the , and then look to Islam to see what can be learned.

Dr Bell pointed out that Islam in and is far more pluralistic and cosmopolitan than the Islam of the , and he proposed that the West could learn a great deal from the more pluralistic forms of Islam about hospitality towards strangers, family and harmonious co-existence as a minority within a host state.

Dr Wee followed this line of enquiry with comments about diversity within a religion, pointing out that a distinction has to be made between Islam the religion and Islam and politics, suggesting, "we must not look at Islam as an object of study but we should use Islam as a tool of analysis."

The session concluded with Dr Alatas's comments on the need to stop demanding that Islam should change and that the key to overcoming disagreements is to ask that Islam become less exclusive. "Islam has not changed in the last hundreds of years. We still use the same prayers that were used a thousand years ago, in the same language."

He suggested that the West and Islam have to accept each other in spite of disagreements and to respect these differences, not try to change each other. "We cannot agree on theology, but we have similar problems and we need to be tolerant towards one another," he said.