City University will join forces with an IT firm to promote the education of Linux. A signing ceremony between the Department of Computer Engineering and Information Technology (CEIT) and Thiz Technology Group Ltd, a pioneer developer of the Linux platform and business software applications, took place on 4 March at CityU. 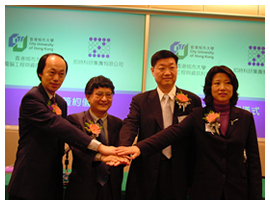 Under the agreement, the two parties will co-organize training on Linux for IT professionals and explore opportunities to develop applications of Linux systems. They will jointly establish a Linux resource and examination centre, the first of its kind at a local tertiary institution. The centre will offer courses in Linux, train teachers and issue accreditations. Thiz also donated a HK$600,000 Linux software package to CEIT. 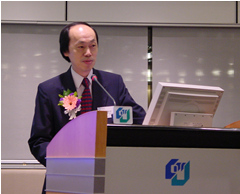 Officiating at the signing ceremony, Professor Edmond Ko, CityU Vice-President (Undergraduate Education), said, "Our graduates are widely acclaimed for their IT competence. I am sure this collaboration will better equip our students with practical IT knowledge and increase their competitive edge." Professor Hong Yan, Acting Head of CEIT, thanked Thiz for its software donation, which he said would advance Department's mission to provide quality education and technology training in Hong Kong. Mr 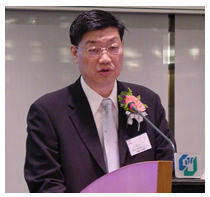 Albert Wong, Chief Executive Officer of Thiz, told the audience the company's mission is to popularize Linux worldwide as an alternative computer system; he also gave an update on Linux development in mainland China. Ms Lily Chan, General Manager of Thiz, said that the establishment of the ThizLinux examination centre at CityU would mark the company's first step towards Linux training in Hong Kong.

Linux, the open-source code operating system, is gaining in popularity with software developers and governments around world, including China, Germany, Japan, France and India, as an alternative to Microsoft's Windows System.

Thiz, a US based developer of the Linux platform, was the first Linux software supplier to be listed on Hong Kong's Growth Enterprise Market in 2001. The company has established the first Thiz Open Software Education Alliances in China, in which over 30 universities, including Peking University, are cooperating to train users of the Linux operating system. City University is the first of Hong Kong's tertiary institutions to become a Thiz training partner.