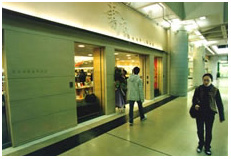 The new campus bookstore opened on 7 February at a new location without much fanfare but with high expectations. The newly fitted-out facility is now under the management of the Commercial Press (HK) Ltd, one of 's largest publishing houses that also operates 16 retail outlets. The new shop, located on Level 3, right next to the escalator off the Library's main entrance in the Green Zone, has opened its doors just in time for Semester B. As more fitting out is expected in the next few months, the bookstore operator will postpone the official launchNa weeklong programme of cultural events of book displays and talksNuntil summer.

OThe reason for the move," said Professor Y S Wong, Vice-President (Administration), who now oversees all campus renovation and building projects, "is to put the bookstore in a better and more convenient spot for students, staff and visitors. In doing so, we have also freed up space on the Level 4 Mall for staff and students to mingle and relax." The Hang Seng Bank was relocated to a new spot next to the Library entrance late last year, thus freeing up more of the indoor Mall for sofas, tables and chairs, and a snack bar.

Under the oversight of the Finance Office (FO), the bookstore is the University's latest effort to turn the campus into a friendlier place to study. It is hoped that the overhauled bookstore, in the hands of a new operator, will become a "hangout" spot for students and staff, in the theme of the re-designed and re-decorated Library. "What probably sets us apart from other campus bookstores in ," said Ms Dean Chiu, FO's Catering Manager, who has day-to-day responsibility for the bookstore management, "is our inviting look and feel." The relocation and re-fitting plan has been more than a year in the making. An unspoken agenda is to nurture it into perhaps the "best" local college bookstore, one with "the right kind of ambiance".

In a way, the efforts have attracted attention: in January the local media voiced their surprise and admiration for the University's intention.

Though just a tad smaller in area than the old one (277 versus 304 sq. metres), the new bookstore sports a total makeover: modern, ambient light, better display shelves with wider aisles, and even cushioned stools placed in convenient locations. Light background music may also be heard. When the shop is fully furnished this summer, some walls will be decorated with paintings and posters hanging from the roof. A narrow mezzanine along the store's north and east faces will be added, connecting to the main floor by a spiral staircase. That part of the design is currently going through the government approval process and construction is expected to begin late month. Except for a caf?, it may very well look like a Barnes and Noble outlet, only on a much reduced scale.

"The idea is to create a comfortable, relaxed but absolutely inviting setting for readers to browse and wander," said Ms Chiu. "We hope it won't turn into another typical "packed-to-the-brim" kind of campus store with few visual delights." The old, demolished bookstore, with its prime floor space given to stationery and sundry items, left much to be desired as a booklover's hangout.

Over the past two years, improving the intellectual ambiance on campus has been high on the agenda of the University management and the redesigned bookstore is seen to be a major impetus in this drive. The President and his senior colleagues have openly encouraged students, most recently at student orientation, to try to read at least 10 general books a year. "Without a good campus bookstore as support," Ms Chiu said, "this will be a far more difficult goal to attain."

Putting its money where its mouth is, the University has committed no less than $1.5 million to the design and fitting out of the new outlet. The project is part of the Campus Ambiance Improvement Plan, which has seen the installation of new escalators on Levels 3 and 4 and improvements in lighting in the Mall. While the project is financed from the University's own reserves, the new booksellerNchosen through a stringent tendering processNis required, as in the case of the previous operator, to cough up a certain amount of money to pay for the design and construction expenses.

The University has high hopes of creating a genuine bookstore: it has, for example, stipulated in its contract that Commercial Press can devote no more than 10% of the floor space to stationery. This will help ease the competition with Cut-Price Collection, which is positioned as a campus convenience store offering snacks, souvenirs, sundry items and stationery. Book displays and office/storage are to take up 70% and 20%, respectively, of space in the new bookshop. At the start of each semester, 70% of the book space area will have to be allocated to academic books (including textbooks) with the remaining portion devoted to general or "trade" books. During off-peak periods, the ratio may be reversed. Commercial Press is also required to stage no fewer than six book-related events a year on campus during its five-year contract period (a "three-plus-two" arrangement), as part of a campus-wide effort to promote a better reading culture. Business hours will be longer, too, especially on Saturdays and during special occasions, such as the University Congregation and information day.

In the coming months, the store will strive for better services and prices (especially on academic books), according to Mr Charles Kwan, Commercial Press's Retail Director. CityU staff and students are not only offered special prices at the campus branch but also a 10% discount on all books at other Commercial Press outlets. From time to time, Commercial Press will draw on its strengths to organize book eventsNauthors" signing parties, talks, seminars and special promotionNon campus. "It's something the Commercial Press, as a major publisher with good connections, is well poised to do," said Mr Kwan. "Anything that can build up readers" interest, weOd be happy to consider and help." The bookshop will also feature a wider selection of general booksNboth in genres and titlesNOwhich we as a major retailer chain can easily get our hands on." Hopefully, book buyers and book lovers will be able to say that the new outlet will be not only about LOCATION and AMBIANCE but SERVICES and PRICE as well.