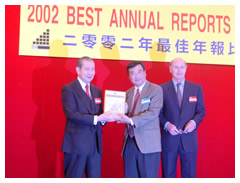 CityU's 2000-2001 Annual Report and Financial Report won a Bronze prize in the Non-profit Making and Charitable Organization category in the 2002 Best Annual Reports Awards organized by the Hong Kong Management Association (HKMA). At a ceremony on 16 December, Professor Y S Wong, Vice-President for Administration, received a trophy on behalf of the University from the organizer.

The Reports, titled "Connecting the World Through Knowledge", were commended for their "well-presented financial statements and comprehensive description of the 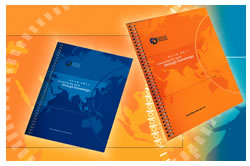 activities of the organization". The Gold and Silver Prizes in the same category, out of 34 contestants, went to the Securities and Futures Commission, and the Hong Kong Monetary Authority respectively.

In July, the Reports also won a Silver Award financial data and an Honours Award for the non-profit making organization section at the 16th Annual International ARC Award in New York.

CityU's 2001-2002 Annual Report is published. The Report outlines the University's achievements and developments in the past year including a summary of the accomplishments of the AURORA Strategic Plan 1997-2002.