Miss Marui Noriko, a budding teacher from Japan, spent three weeks, from mid-February to early March, in the Division of Language Studies on an internship programme to polish her Japanese teaching skills. Her brief stay proved to be a stimulating experience for both Miss Noriko and the students in the Division. 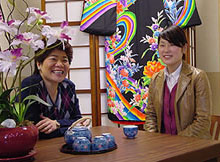 Miss Noriko, a third year student from Japan's Himeji Dokkyo University , said she was impressed by the language competence and enthusiasm of the students she met at CityU. "The students in the Division are versatile in their language abilities. Many of them can speak three to four languages or dialects. They are hardworking and active too. They inspired me to brush up my English skills to be as good as they are."

Dr Rita Takahashi, Senior Lecturer in the Division, said that Miss Noriko's presence in some of her classes gave a boost to the students. "They were excited to have a young person from Japan come and talk to them about her own culture. Marui mingled well with the students and encouraged them to chat to her in Japanese. IOd welcome any future chance to host other interns from Japan , because it's a wonderful opportunity for cultural exchange."

During her stay in Hong Kong , Miss Noriko had a taste of traditional Chinese culture by taking part in the Chinese New Year celebrations. She watched the fireworks and was given lai see. "I was simply enchanted by the many red decorations I saw during the festival. They were beautiful," she said.