Off to a new start: College braces itself for big challenges 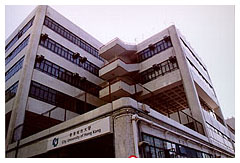 Were it not for a change of title and office setting, one would hardly notice that Professor Richard Ho has settled into a different job. In espousing the value of associate degrees, the College's new Provisional Provost relied on such vocabulary as "portfolio", "financial viability", "capital investment" and "Market positioning". All in all, he spoke in the tone of efficiency and purpose that one would normally expect from any semior business executive.

After taking over from Professor H K Wong in early September last year, Professor Ho began the first few weeks of his tenure by meeting with his teaching staff, usually over breakfast in groups of eight to 10 representing at least three of the five existing divisions. "That's a good way to get to know to people and the issues," he said, "That's an idea I started in my first days as Dean of Business." Hunched over the coffee and toast, their free-ranging discussions invariably came back to one central issue: What would it be like for College staff to come into work in the morning six or seven years from now? How would they like their work to turn out to be?

Professor Ho felt that College colleagues appeared to be more forward-looking than his staff in the Faculty of Business (FB) were in the beginning. "Eighty percent of the time, FB staff complained about past problems, whereas the people I spoke to in the College were focused on the future," he said. "Maybe the funding environment in the Faculty is more stable." While many of the business programmes are, and will continue to be, offered under the auspices of government funding through the University Grants Committee (UGC), most provided by the College of Higher Vocational Studies are likely to be ported over to a self-financing platform in five or six years' time. Even though the Government has not made clear its final plan, the University nevertheless started planning for the College to adapt to this fundamental change.

In October 2000, the Chief Executive Mr Tung Chee-hwa called for an expansion in tertiary places to accommodate 60% of secondary school leavers by 2010, as a means to help improve Hong Kong's human resource environment in its move towards a knowledge-based economy. Most of the new post-secondary places the Government envisages will fall under the category of self-financed sub-degree programmes, an area in which the College can rightly claim expertise and excellence. The College of Higher Vocational Studies was first founded in 1991, and currently has 4,800 students, enrolled in 25 government-funded associate degree programmes taught by 240 staff. With that kind of unique strength, the University believes that the College is one of the effective ways to extend better educational opportunities to a wider community, the core of our mission (see Linkage No. 196). Consequently, a vigorous planning process within the University was started soon after Mr Tung's announcement. Two major decisions arising from that planning process were, respectively, a recommendation to increase, phase by phase, the College intake to some 10,000 in six to 10 years and a decision to convert all of its three-year higher diploma programmes to two-year associate degree programmes (AD). On the latter decision, the University acted quickly: intakes into AD programmes started in September 2001.

New campus
On the former decision, challenges abound. First and foremost is finding a new campus. "If we are talking about 8,000 to 10,000 full-time equivalent students," Professor Ho explained, "we will certainly outgrow our existing space here in Kowloon Tong, which is getting increasingly congested." In the interim period before a new site is identified and construction approved by the Government, the College will try running some of its full-time programmes in a 90,000 square foot school building in Telford Gardens, Kowloon Bay, alongside the School of Continuing and Professional Education (SCOPE). The University early last year took out a seven-year lease on a secondary school building that features 24 lecture and tutorial rooms, seven specialist rooms and computer laboratories, a 700-seat school hall and a 200-seat lecture theatre. Starting in September, about 600 to 700 students will enrol in the College's first self-financed AD progammes in business administration, bilingual communication, digital design, leisure and tourism management. The Telford Gardens building, an "experimental campus" in the words of Professor Ho, will be heavily IT-equipped, with ample physical fitness and sports facilities. There, students' learning will be aided by personal digital assistants (PDAs) in wireless LAN and physical fitness activities will be integrated into their daily routines.

For Professor Ho, offering AD programmes in a corner of a commercial building is not a viable option. "We are not talking about working adults on part-time evening programmes but 17- or 18-year-olds who need a proper campus environment for all sorts of social interaction and activity." In the long haul, he is looking for a site for a permanent campus of some 800,000 square feet, and the initial idea has been communicated to the Government. "We are hoping to build a campus with a distinct character and ambiance that will stimulate the intellectual development of our students," said Professor Ho, "and they should be exposed to broad-based education, to different disciplines." So far, no potential site has been named.

All in all, the College expects a new permanent campus to be ready for use in six or seven years' time, around 2007 and 2008, to coincide with the switch to six-year secondary school and four-year university education. AD programmes, like their counterparts in North American community colleges, are designed as a flexible alternate route to higher education for high school leavers.

The "2+X" model
In order to take College student numbers from the present level to 10,000 in six to 10 years' time, Professor said that a few hundred to 1,000 new places will have to be added each year and these would be offered on a self-financing basis. A host of new programmes will be rolling out, starting in September 2002 -- for instance the AD in leisure and tourism management and bilingual communication--each carrying a tuition fee of HK$42,000 a year. Professor Ho admitted that fee-charging programmes are a challenge but there are unique learning experiences that cannot be found elsewhere. As a starter, as much as 15% of the students will have the opportunity to spend a semester abroad in the UK, the US or Australia.

Associate degree programmes are a new breed in Hong Kong's educational landscape and until now have had a limited currency. They may be best explained in Professor's Ho's "2+X"model, a result of his discussions with staff. The "2" of course, refers to the two years it takes (usually over four semesters) to complete the basic AD programme at CityU but the "X" can be any one or combination of two outcomes. First, it means, upon graduation, going into further studies with local or overseas universities. In the latter case, the studies can be actually done abroad or be offered through the College in Hong Kong on a full-time or part-time basis. "We are building up a consortium with universities in Australia, the UK and North America," said Professor Ho, "so that our graduates will have the choice of getting a bachelor's degree with one or two more years of study." One recent example of such collaboration was the signing of a memorandum of understanding with the University of Hull in early December. For some self-financing students, "X" can also include one semester of study in an overseas or mainland university during the two years of the AD programme at the College. Second, the "X" can point to professional recognition and internship.

Name change
Finally, what will the new College be called, in the wake of these changes? Professor Ho said both he and his colleagues believe that the original title no longer fits the new profile, because the new academic entity is more than "vocational training": the future AD programmes will be premised on broad-based whole person education. "But we are not in a great hurry to have a new name," he said, "wide consultation within the College and the University is needed." In early January, under his leadership, College staff went on a retreat to discuss its vision and market positioning, and, if the chance arises, its new name.