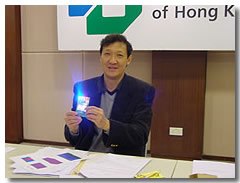 Professor David Tong, Chair Professor of Physics at the Department of Physics and Materials Science, joined the ranks of 's scientific elite this past week with his election to the Chinese Academy of Sciences.

Membership in the of Sciences is one of the most distinguished honours that can be attained by scientists in . The Academy currently has more than 600 members. New members are elected every two years.

Professor Tong was elected for his outstanding achievements in the study of surface physics and nanotechnology. On receiving the title, Professor Tong said that he would strive to promote , through the combined efforts of local universities, as an international hub for nanotechnology research.

Professor Tong received his BSc from the University of Hong Kong and was awarded his PhD from the University of California at in 1969. From 1969 to 1972, he was NSF Fellow at . Professor Tong's many awards and appointments include a Fullbright East-West Centre Award (1969), the Distinguished Research Award, University of Wisconsin-Milwaukee Foundation (1979), the Croucher Foundation Senior Research Fellowship (1997-98), and the Royal Society Distinguished Professorship (1993). He is also a Fellow of the American Physical Society.

Professor Tong's consultancy work includes appointments to IBM, the US Naval Research Laboratory, NASA's Space Epitaxy Programme and the Lawrence Livermore Laboratory. He is Editor-in-Chief of Surface Review and Letters and is on the Editorial Board of Acta Physica Sinica. He was a member of the Academic Oversight Committee of the Academia Sinica, , (1994-2001). Before joining CityU, Professor Tong was Chair Professor and Head of the Physics Department at the .

Professor Tong was among six local scholars selected for the prestigious title. More than 330 mainland and candidates were nominated this year.. Two other CityU scholars, Professor S T Lee from the Department of Physics and Material Science and Professor Andrew Leung, Head of the Department of Building and Construction, were also nominated.