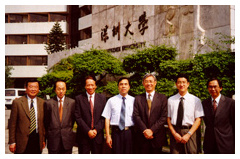 In the light of the swift development of the Pearl River Delta and Hong Kong's entry into a new phase of economic transformation, an 11-member delegation from the City University of Hong Kong visited five cities in the Pearl River Delta (PRD) last month to explore the possibilities of enhancing cooperation with the region.

CityU President Professor H K Chang, leader of the delegation,said, "Hong Kong and the Pearl River Delta have their own respective strengths. They should be able to complement each other in many aspects. Collaboration between the two will definitely be beneficial to the development of both and China as a whole."

With this in mind, the delegation set off from Hong Kong on November for a four-day visit to the region. Following a horseshoe-shaped route, they toured five fast developing cities--Shenzhen, Dongguan, Guangzhou, Zhongshan, and Zhuhai, calling on 14 government, academic, scientific research, and corporate units. At all the cities except Shenzhen, they were received by the mayor of the city.

A talk was scheduled for the afternoon with the President of Shenzhen University, Professor Xie Weixin and the Vice-President, Professor Xing Miao, after which the group proceeded to Dongguan, where they were received by the Mayor, Mr Li Guikang and the Secretary of the Dongguan City Commission , Mr Tong Xing. "Dongguan is a very interesting city that has attracted a lot of Hong Kong investors. The Dongguan University of Technology is currently undergoing expansion and they have expressed a strong wish to collaborate with CityU," Vice-President (Institutional Advancement), Professor Y S Wong said. The delegation also paid a visit to the Dongguan plant of SAE Magnetics (HK) Ltd, with which CityU has enjoyed a close working relationship in recent years. The visit led to a better understanding of the conditions under which our students spend their summer internships at the company.

Visiting Guangzhou, Zhongshan and Zhuhai
The group then made their way to Guangzhou, where they spent the night. The itinerary for the following morning consisted of visits to the South China University of Technology and Zhongshan University, where the presidents of the two institutions, Professor Liu Huanbin and Professor Huang Daren, respectively, received them. Zhongshan University has always been an important collaborative partner of CityU. Talks this time extended to concrete projects for future cooperation, such as student exchange, recruitment of mainland students for CityU, joint postgraduate programmes, and joint research projects. In the afternoon, the Deputy Party Secretary and Mayor, Mr Lin Shu Sen, outlined for the delegation the main directions and emphases of Guangzhou's recent developments.

On the morning of the third day, the delegation headed for Zhongshan where they were received by the Mayor, Mr Chen Genkai. Today's Zhongshan is a brand new industrial city. Since the building of the 70 square km (smaller than Hong Kong Island by only 20 square km) Zhongshan Torch Hi-Tech Industrial Development Zone by the State Science and Technology Commission in 1992, factories have sprung up in the city, accompanied by a proliferation of R&D units. The city has taken on a completely different look.

A hectic but exciting trip
All the members of the delegation were excited and encouraged by the trip, hectic though it had been. Almost everyone observed that the development of the PRD is extremely rapid, possibly even more so than that of Hong Kong. Vice-President for Business and Finance, Mr James Ng, commented, "The PRD seems to be more capable than Hong Kong of adjusting to the changes brought about by globalization. Their leaders are also very knowledgeable of what is demanded of them by the world and the times, and they are people of action. A university can be built very quickly, unlike in Hong Kong where talks alone can drag on for years."

"The fast development of the PRD region is without precedent," Professor Wong said. He believes that as this industralized region continues to strive ahead and the standard of living continues to improve, it will transform itself into a new technology-and-knowledge-oriented society. "Education is the key element to this change," he added. It's worth nothing that nurturing of expertise has become the PRD's highest prority. "Everywhere we visited--whether be it governmental, corporate, or academic organization--acknowledged the importance of education to the future development of the region, especially the nurturing of highly educated expertise," Professor Edmond Ko, Vice-President of Education remarked.

Vice-President (Research), Professor P S Chung, also shared this view. "Hong Kong businesses provide approximately five to six million posts in this region. Development in the direction of high technology is a certainty for the future, and that will need the support of high quality universities. Right now, the cities in the PRD are lacking in such institutions, especially in Dongguan and Zhongshan, where there are only polytechnics and no universities. Hong Kong can give them a hand in this regard," he said. 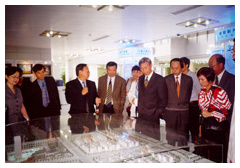 The delegates felt the distance between the PRD and Hong Kong seemed to have narrowed after the trip. The projects for collaboration between CityU and the region, such as academic exchange, research cooperation, and the running of academic programmes in the PRD, also seemed a step closer to materialization. For Professor Chung, one thing about the trip made him especially proud: "This trip reinforced my belief that our policy to set up beach-heads in Shenzhen and Zhuhai (Shenzhen Virtual University Park and Zhuhai Southern Software Park) is the right one," he said. The trip also gave Professor Ko ideas. He said he hoped to expand the Student Leadership Conference to include the PRD next year by inviting students from the region to participate.