Dealings in TeleEye Holdings Ltd, of which City University of Hong Kong is a founding shareholder, commenced on 8 May on the Growth Enterprise Market (GEM) of the Stock Exchange of Hong Kong. 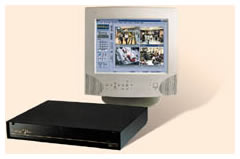 The trading of TeleEye shares represents a significant milestone in the development of CityU, the first institution of higher education in Hong Kong to successfully nurture a technology company from start-up to public listing.

TeleEye is a closed circuit TV system that is transmitted from remote locations via telephone lines. The latest model, TeleEye Pro, is the world's fastest phone-line remote video monitoring system. The company's products have been sold to more than 500 customers in 30 different countries.

With 50 million TeleEye shares offered and placed at $0.6 a share, the net proceeds are expected to be $23 million, earmarked for establishing a global sales network and expanding research and development. TeleEye is 57.8% owned by its four founders- Dr Cliff Chan Chok-ki , Dr Stanley Chan , Dr Wallace Ma and Mr Nevin Ho and CityU Enterprises Ltd.

"The public listing of TeleEye represents a first for City University of Hong Kong-but it will certainly not be the last," said Professor P S Chung , Vice-President (Research). At least 15 other incubation projects are in various stages of development at CityU and Professor Chung said he is confident that they will see the same success.

The beauty of TeleEye is that it is a remote monitoring system which helps people to manage their operations from a distance. Those business users who have several places of operation - factories in the Chinese mainland and other parts of Southeast Asia, for example - find TeleEye particularly useful because they can see what's going on in different parts of their warehouses, shops or factories.

As a monitoring system, TeleEye is unique in that it has the world's fastest video transmitters. It also boasts a range of 18 models of transmitters with application software in nine languages. With the phone line system basically targeted to business users-shops, factories, banks etc-the company started something new: live video on web pages.

Cyber TeleEye and TeleEye III (web-based video monitoring and network-based video transmitters, respectively) have applications in intelligent buildings, traffic monitoring,
e-commerce and e-promotion. Target customers are all home users and the general public. In fact, Dr Chan said, these products have already been sold to a major local property developer, in a joint project with another CityU company, e.Energy Technology Ltd (see story on page 33), to control around 200 buildings in Hong Kong.

Always happy with a challenge, Dr Chan said the company is now working on developing live video for mobile devices. "Even when they're on the road, people will be able to manage their businesses through their PDAs." In around a year's time, they expect to have software for mobile phones, too.

Dr Chan believes TeleEye has a niche in the market because it is a leading developer of signal processing technology and has a product line that has many different applications.