Students enrolled in the Associate of Arts in English for Professional Communication were treated to an informative and entertaining talk last December by Mr Martin Clarke, Head of RTHK Radio 3. One of Mr Clarke's main contributions to Hong Kong society is the running of Operation Santa Claus, which has raised over $41 million for various charities over the past 12 years. 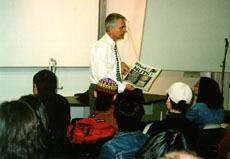 Mr Clarke's talk--"Press Freedom: Who Needs It?" --was one in the Communication Seminars series, organized by the Division of Language Studies, designed to foster cooperation and the exchange of information between CityU and the community and break down the walls that occasionally separate the worlds of theory and practice. It covered a number of areas, including the sensitive decisions he has to make in his job; how censorship in Hong Kong compares with other countries in the region; and how different media organizations handle the same story in different ways.

The 80 or so students and five lecturers who attended the talk said they thoroughly enjoyed it and were impressed by the way Mr Clarke managed to keep the audience? attention armed with nothing more than a board pen and some copies of the day's newspapers. It is hoped that there will be similar seminars in the near future.