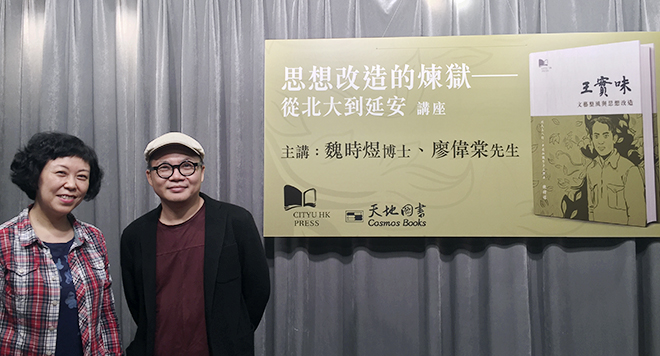 (From left) Dr Wei and Mr Liu.
The life of the Chinese writer Wang Shiwei was the focus of a book talk organised by City University of Hong Kong Press (CityU Press) on 7 January.
Dr Louisa Wei Shiyu, Associate Professor of CityU’s School of Creative Media, and the author of the book Wang Shiwei: A Reform in Thinking, hosted the talk and fielded questions from the audience about the “Wang Shiwei Incident” alongside the writer Mr Liu Wai-tong.
During a documentary produced by Dr Wei and screened during the talk, elders from the city of Yan’an in Shaanxi Province who had witnessed what happened to Wang shared their stories, providing valuable information for readers to better understand the life of the Chinese writer.
The talk was titled “Ideological Transformation – From Peking University to Yan’an”.