​Students from City University of Hong Kong (CityU) won a gold medal at an international competition in the US with their novel gene-based remedy to tackle lactose intolerance, a common digestive problem where the human body is unable to digest lactose, a type of milk sugar. 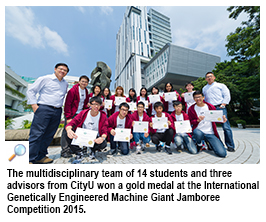 The team of 14 students from the Department of Biology and Chemistry (BCH), Department of Biomedical Sciences (BMS) and Department of Mechanical and Biomedical Engineering (MBE) competed with around 2,700 participants from 279 multidisciplinary teams from all over the world to win the top award at the International Genetically Engineered Machine (iGEM) Giant Jamboree Competition 2015.

The symptoms of lactose intolerance include bloating, stomach cramps, diarrhea and nausea after consuming milk or dairy products. Normally, the enzyme lactase in the small intestine will break down lactose into glucose and galactose for absorption. For people with lactose intolerance, their bodies produce little or no lactase. Undigested lactose will therefore enter the colon where various types of bacteria may ferment the lactose to produce lactic acid and gases as by-products. These by-products are the culprits of the symptoms.

There is evidence suggesting that dairy consumption is good for the human body, which is associated with lower risk of hypertension and improvement of bone health. With the aim to helping people with lactose intolerance to enjoy the diverse health benefits derived from dairy consumption, the CityU team spent over three months to design and construct a probiotic E. coli strain that has the ability to produce high levels of the β-galactosidase enzyme (a type of lactase), and will “self-burst” to rapidly release the lactase enzyme upon sensing the presence of lactose in the surrounding environment.

“This ‘self-burst’ feature in the genetically-modified E. coli strain has many potentially useful applications in biotechnology,” said Dr Richard Kong Yuen-chong, the principal advisor of the team and Associate Professor in BCH.

For example, the E. coli strain can be genetically engineered to “self-burst” in response to changes in the external environment such as shifts in temperature or pH (acidity) to release specific therapeutics or drugs. The team is considering filing a patent for this innovation. 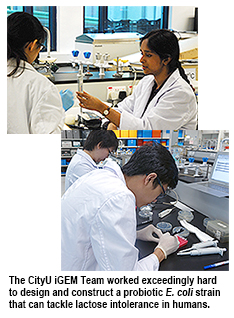 All the students said that they found the competition to be a good learning experience for discovery and innovation.

“The iGEM experience has been a transformative one. It gave us the opportunity to expand our knowledge beyond the confines of lectures and tutorials to create an impact," said Aruna Surendran Ramkrishnan, a Year 3 BCH student.

“It was a great opportunity to integrate science with society. We not only share the details of our project with high schools in Hong Kong but also with the scientific community at the international congress in Boston. It was simply amazing to know that many people who have lactose intolerance expressed interest in our project,” said Tina Yiu Tak-mei, a Year 3 MBE student.

Tommy Kong Chun-long, a Year 4 BCH student, said there was no doubt that synthetic biology would be a big hit in the biotechnology field in the near future. “Through the competition, I have become a more confident person and I would like to thank the advisors for their guidance and support,” he said.

In addition to tackling problems on the scientific front, the iGEM Competition requires students to address in their project issues related to bioethics, sustainability, social justice, biosafety, biosecurity, intellectual property rights and the promotion of synthetic biology as a new scientific frontier.

For more information on the winning project, please visit: http://2015.igem.org/Team:CityU_HK.