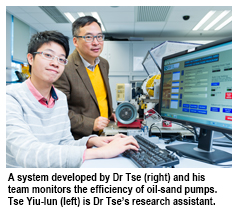 An automatic system developed by scientists at City University of Hong Kong (CityU) is helping Syncrude Canada Limited, one of the world’s largest oil-sand corporations, to monitor the efficiency and health of its oil-sand production pumps.
The system will ensure the smooth operation of oil-sand extraction and a highly efficient output, and prevent losses incurred from breakages that disrupt production, according to Dr Peter Tse Wai-tat, Associate Professor from the Department of Systems Engineering and Engineering Management.
His research team has been commissioned once again by Syncrude Canada Limited, this time for a three-year project worth HK$2 million, raising the total funding from this partnership to HK$3.5 million.

The company, which operates at the Athabasca Oil Sands Deposit in Canada, produces 350,000 barrels of crude oil daily, meeting demand of 6.2 million Canadians. A major component for carrying the slurry to other plants for processing and refining is a system of slurry pumps that processes the material 24 hours a day. However, excessive wear and tear caused by the continuous bombardment of sand and small pieces of rock will cause the slurry pumps to break down, which in turn disrupts production and can incur huge losses for the company.
Particularly vulnerable to breakage in the pumping system is the impeller and its accessory parts, which together cost more than HK$300,000. Including the labour for replacing damaged parts, an impaired impeller means a loss of over HK$700,000. Yet the costs can rise to more than HK$2 million if the other components of the oil-sand pump are damaged due to a broken impeller and, finally, causing an overhaul of the slurry pump. Moreover, the unexpected suspension of oil production caused by a failed pump installed in series with other pumps can lead to losses of HK$1.3 million per day.

has adopted Dr Tse’s recommendations and installed vibration sensors and pressure gauges on the oil-sand pumps. These sensors monitor the “health conditions” of the impeller and its accessories.
Dr Tse has taken the lead in tracking the deterioration of the oil-sand pumps by monitoring high-frequency vibration. In the past, the science and technology world monitored only low-frequency vibration, but that process lacked sufficient sensitivity in determining problems.
“Micro cracks caused by the continuous bombardment of sand will generate vibration that can only be detectable at high-frequency zones. The higher the magnitude of the vibration in the frequency domain, the greater the likelihood that the number of cracks inside the impeller will grow. Ignoring an increasing trend will ultimately lead to damage. Consequently, the pump will lose its efficiency,” Dr Tse explained.
A slurry pump fault diagnosis system previously developed by Dr Tse can automatically capture operating data from the pump, automatically extract fault related features from the data, and then analyse the features in order to determine the current health of the monitored pump. If any anomaly has occurred, the system will issue an early fault warning to the maintenance staff so that they can repair/replace the necessary parts before a fatal breakdown occurs.
Because of the early warning, the maintenance staff can have sufficient time to plan and take the necessary precautions. They can shift production to another pump line in time to avoid interrupting production. Dr Tse’s pump fault diagnosis system has been adopted by Syncrude Canada Limited.
Dr Tse said his team would continue to enhance his pump monitoring system in order to have the future ability to estimate the “remnant lifespan” of the pumps, helping the company to determine in advance when a pump should be replaced.
Dr Tse is an expert on signal processing and engineering asset management. He was elected as a Fellow of the American Society of Mechanical Engineers (ASME). His smart asset maintenance system has been tested or adopted by major local and overseas corporations, including Hong Kong and China Gas Company, CLP Power Hong Kong, Swire Properties Management, Swire-Coca Cola HK, MTR Corporation, Hong Kong Air Cargo Terminals, Emerson Network Power etc. Dr Tse has provided over 30 local and overseas corporations with smart asset monitoring technology and systems, as well as technical consultancy.
​​​​​​​​​