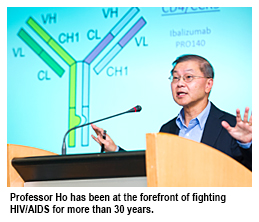 More than 35 million dead so far; an estimated 35 million living with the virus; around 99.5% of those infected likely to die unless they get treated; yet still no viable vaccine forthcoming despite years of research.
The story of the spread of HIV, the virus that causes AIDS, has dominated world health since the early 1980s, and for more than 30 years the speaker at the latest City University Lecture Series on 12 November at City University of Hong Kong (CityU) has been at the forefront of the battle against what he call the “worst of plagues”.
Professor David Ho is the founding Scientific Director and Chief Executive Officer of the Aaron Diamond AIDS Research Center, and the Irene Diamond Professor at The Rockefeller University, and also a recipient this year of a CityU Honorary Doctor of Science.
His research has unveiled over the year the dynamic nature of HIV replication in vivo and revolutionised people’s basic understanding of this disease. This knowledge has also led Professor Ho to champion combination antiretroviral therapy that has resulted in the unprecedented control of HIV in patients. 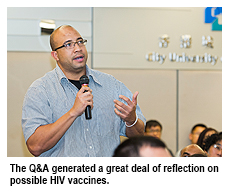 However, as Professor Ho explained, a cure is still not available due to the complexity of the virus and the way it replicates itself, making the identification of a suitable vaccine extremely challenging.
Currently, he said, the most promising agent undergoing extensive research and trials is a third-generation integrase inhibitor drug called GSK744LA—the LA stands for “long-acting”.
The drugs, he said, appeared to work in humans as a pre-exposure prophylaxis, i.e. a way for people who have not tested positive for HIV to protect themselves by taking preventative drugs before high-risk sexual encounters or IV drug taking.
“The ultimate goal is to improve the efficacy and lower the HIV rate,” Professor Ho said. 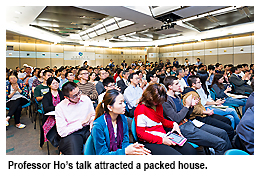 Long-acting agents, he argued, promised researchers greater results. Humans are likely, at some stage, to forget the pill that they are supposed to take every day, increasing their risk of virus exposure.
Drugs were certainly effective against lowering the viral load in an infected person, as trials have shown, he said, but humans were not consistent drug takers over the long term. So a drug that stays in the body for a longer period of time, anticipating human fallibility, was thought to offer greater protection.
Unfortunately, perhaps the most effective protection that we have right now, the condom, is underused.
“Condoms offer more than 99% protection, yet we still see around 2 million new infections every year, which shows how unreliable humans are,” he said.
So drugs trials will continue until an effective vaccine is defined and given to those in most need, he said.